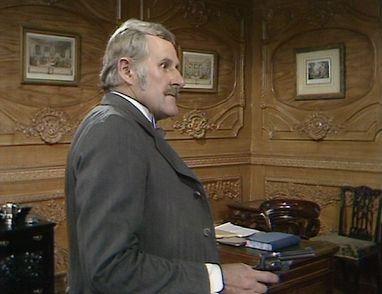 Peter Vaughan as Horace Dorrington in
The Case of the Mirror of Portugal by Arthur Morrison
Adapted by Julian Bond.  Directed by Mike Vardy

A penniless Frenchman called Jacques Bouvier (Michael Forrest) spins Dorrington a strange tale. During the French Revolution his family acquired one of the French Crown Jewels – known as The Mirror of Portugal. The diamond is worth one hundred thousand pounds and Jacques feels that it should be his by right – although at present it’s in the possession of his cousin Leon (Oscar Quitak).

It’s a tale that intrigues Dorrington, although he ejects Jacques from his office and tells him that he wants nothing to do with the case. Afterwards, he explains to Farrish and Miss Parrot that “he wanted me to steal that diamond. He wanted me to do it for nothing and give him three quarters of the proceeds”. Naturally, Dorrington plans to steal the diamond and keep one hundred per cent of the proceeds. But someone beats him to it – and it wasn’t Jacques ….

The Case of the Mirror of Portugal was the second Dorrington tale adapted for the series.  It, along with Arthur Morrison’s other Dorrington stories, can be read here.

There’s some, interesting, French accents in this story.  Clearly French actors were thin on the ground, so the Welshman Michael Forrest essays the sort of accent that Inspector Clouseau would have been proud of.  It certainly helps to liven up the beginning of the story.

A young Jeremy Irons pops up in a blink-and-you’ll-miss-him role as a silly young ass (“What larks eh?”).  There’s a more substantial part for Paul Eddington later on in the story as Hamer and Ingrid Hafner is also very good as Hamer’s wife, Maria.

It turns out that Hamer stole the diamond and it’s currently in Maria’s possession.  Dorrington attempt to force them to hand it over, but she throws it into the Thames, rather than give it to Dorrington.  If she can’t have it, then she’d sooner that nobody did.

As might be expected, this doesn’t please Dorrington, but he quickly recovers his equanimity.  And after Jacques and Leon visit his office and tell him they’ve decided to join forces to recover the diamond, he’s happy to tell them exactly where it is (once they’ve paid him eighty guineas for the privilege, of course).

“At the bottom of the Thames. Approximately in the middle, I’d say, where the steps lead down to the towpath at Richmond lock. How do you get it back? Well, you could buy a boat and try fishing for it.  But if that doesn’t appeal, you could wait for some future age until the bed of the Thames is rediscovered as a diamond field, I suppose”

As with The Affair of the Avalanche Bicycle & Tyre Co. Ltd, Dorrington doesn’t get the ultimate prize – although he doesn’t come too badly out of it.  Peter Vaughan is, once again, smoothly ruthless as Dorrington.  Given that he’s a crook and a swindler, you don’t really want to see him finish on top – but Vaughan is just so entertaining in the role and it’s his charisma that drives this (it must be said, fairly slight) story along.