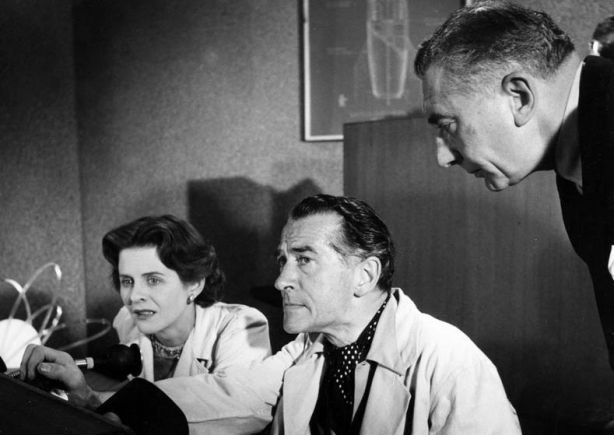 One morning, two hours after dawn, the first manned rocket in the history of the world takes off from the Tarooma range, Australia.  The three observers see on their scanning screens a quickly receding Earth.  The rocket is guided from the ground by remote control as they rise through the ozone layer, the stratosphere, the ionosphere, beyond the air.  They are to reach a height of 1,500 miles above the Earth and there learn what is to be learnt.  For an experiment is an operation designed to discover some unknown truth.  It is also a risk.  (Opening narration)

Contact Has Been Established opens with Professor Quatermass and his team anxiously checking for news of the rocket.  It’s an early opportunity to see the main members of the British Rocket Group in action.  John Paterson (Hugh Kelly) and Peter Marsh (Moray Watson) are, at this time, fairly anonymous button-twiddlers and they don’t really have a great deal of opportunity to establish specific characters (although Watson does have a memorable moment at the end of the episode when he reacts with horror at the news that two of the three astronauts are missing.  Had this not been live then possibly another take would have dialed down his intensity – but alas, this was live and there were no second chances).

Isabel Dean played Judith Carroon, wife of Victor (one of the astronauts).  She had the sort of cut-glass accent that was still common at the time (although it was slowly vanishing).  Her rather stilted delivery does play against the emotion she had to express – but it’s a difficult role anyway, so it’s probably wise to cut her some slack.

The obvious man in charge is Quatermass (Reginald Tate).  Tate is probably the forgotten Quatermass (due to only two episodes from this story existing).  Had he not died suddenly, just before production of QII, then that obviously wouldn’t have been the case, since there was every indication he would have carried on with the role as long as Kneale had continued to write it.  Certainly Kneale himself had envisaged Tate continuing, both on television and on film, and in time it’s probable that he would have been synonymous with the role of Professor Quatermass.

It wasn’t to be though, so we’re left with just these two episodes to gauge how he played the role.  It’s certainly very different from Brian Donlevy’s take of the character in the Hammer film (which Kneale strongly disliked).  Whereas Donlevy was brash and loud, Tate is quiet and thoughtful – but there’s nevertheless an intensity about him.  Would he have been as good as André Morell in QATP, playing the older, more embittered Quatermass? It’s difficult to answer, but the evidence we have with these two episodes suggests that he would have been more than decent.

Technical imperfections are always going to occur during live broadcasts and there’s a few in this episode, although nothing too terrible.  The first sight of the rocket, crashed into the house, is impressive – but it appears that the grams weren’t cued up straight away, as there’s a pause of about five seconds before we hear any sound effects (dogs barking, babies crying, the sound of fire, etc).

If Isabel Dean gives a performance that to modern eyes seems somewhat unrealistic, then the same could be said of Iris Ballard as Mrs Matthews (“oh my gawd Len, it’s something dreadful”).  It’s a character drawn from a stock type (frightened working-classes) and it doesn’t really convince.  The first few minutes of the scene with the crashed rocket are rather tricky anyway – there’s some wobbly camera-work and the sound is indistinct at times (it seems that the boom microphones couldn’t get close enough to the actors).

Thankfully, Katie Johnson as Miss Wilde is on hand to liven up proceedings.  Best known as Mrs Wilberforce in the classic Ealing comedy The Ladykillers (1955), Johnson is delightful as the little old lady more concerned about the safety of her cat than the fact that a rocket has crashed into her house!

The area quickly becomes a circus, with reporters (headed by the foppish James Fullalove, played by Paul Whitsun-Jones), policeman, fireman, barrow-boys and drunks.  But whilst there’s chaos all around them, Quatermass’ team work on, attempting to establish contact with the crew within the rocket.

One of the pleasures of watching the BBC Quatermass serials is to observe how many times the makers of Doctor Who later ripped off/lovingly paid homage to (delete as applicable) Kneale’s story concepts.  Nigel Kneale famously loathed Doctor Who and refused the offer to contribute a script for the series, but that didn’t stop the programme (at various points in its history) borrowing heavily from the Quatermass canon.

The end of this episode, when the rocket is opened and it’s discovered that two of the astronauts are missing, is very similar to the Jon Pertwee story The Ambassadors of Death (although they went one better and had all three astronauts vanish!)  The sole survivor, Victor Carroon (Duncan Lamont) must hold the answer to the mystery and maybe in the next episode things will become clearer.