Skip to content
HomeQuatermass and the Pit – Episode One – The Halfmen 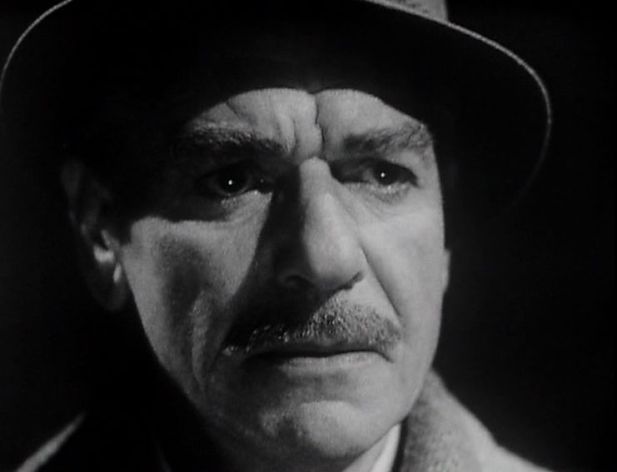 For many people, including myself, Quatermass and the Pit is the pick of the Quatermass serials.  Partly this may be due to familiarity (an edited compilation was released on VHS in 1988) but it’s undeniably a quality production.  It’s certainly the best-looking of the original trilogy, thanks to advances in the late 1950’s with the telerecording process as well as the existence of the original film sequences.

Quatermass II was telerecorded with a suppressed-field recorder, whilst Quatermass and the Pit used a stored-field film recorder. The upshot is that the picture quality of this third serial is much more detailed and smoother (plus the original video look was restored for the DVD release).  The film sequences, as per usual for the time, were shot on 35mm film and the majority of them have scrubbed up very well.  Comparing the pristine film inserts here to the blurry ones from Quatermass II is pretty much a night and day scenario.

So it looks very good, but what about the story?  It’s a very different beast from Quatermass II.  QII hopped from location to location and had a fairly large cast.  Whilst various characters come and go in QATP, the action centres on just three individuals – Professor Quatermass, Dr Matthew Roney and Colonel Breen.

After the wooden performance of John Robinson, it’s clear within a few minutes that we’re in very safe hands with André Morell.  Morell’s Quatermass has many traits that Robinson’s take on the character sorely lacked – a wry sense of humour and personal charm, for example – whilst he still exhibits the same steely determination. As we’ll see in this episode, this is an older, more embittered Quatermass. The rocket group that he founded is still active, and establishing bases on the moon is still the intention, but the military now have the upper hand and Quatermass faces being reduced to a mere bystander.

Dr Matthew Roney (Cec Linder) is, like Quatermass, an expert and enthusiast in his field. The opening scene shows us the discovery of a strangely-shaped skull, unearthed during the redevelopment of a site in Knightsbridge. There’s a nice piece of visual shorthand used after this – as the camera tracks across a series of newspapers, each displaying related headlines (“Apemen at Knightsbridge”, “Further discoveries at Knightsbridge”, “Knightsbridge Apemen – More Finds” and “Three More Bodies Says Scientist”) which significantly advances the plot in a matter of seconds.

Roney, together with his devoted assistant Miss Judd (Christine Finn), calls a press conference to try and drum up some publicity for his finds – he’s also trying to force the contractors to give him extra time to continue the excavations. Roney unveils an impression of what he considers the apeman (who he believes has lain undisturbed for at least five million years) could have looked like.  Later he receives some good-natured ribbing from his friends and colleagues about this.  “You know, a lot of people may think it’s a trifle improper to publicise wild guesses”.  Roney agrees, but it was a gimmick that sparked press interest – and publicity is what he needs.  Afterwards, he runs into Quatermass.  Quatermass is off to the War Office and tells him that “for all your troubles you’ve got one thing to be thankful for.  There’s no military value in fossil apes.”

Colonel Breen (Anthony Bushell) has just been seconded to Quatermass’ rocket group as deputy controller.  Breen is the personification of everything that Quatermass despises, so it’s pretty clear that their partnership will be an uneasy one.  In this episode, Breen appears to be a straightforward, capable officer.  As the serial develops, we’ll see how he reacts when faced with events that are outside his strict frame of reference ….

The meeting at the War Office therefore couldn’t have gone worse for Quatermass.  He’s essentially lost control of the rocket group (the Minister makes it clear that whilst there’s no call for his immediate resignation, it’s something that will probably happen in the not too distant future).  Quatermass created the rocket group for peaceful, scientific research and he’s horrified to find it appropriated by the military for their own ends.  “From the very start we’ll be going into space with one thought – war!  We’re on the verge of a new dimension of discovery.  It’s the great chance to leave our vices behind us, war, first of all.  Not to go out there dragging our hatreds and our frontiers with us.”

Needless to say, this speech (delivered to mostly military types) is treated with stony indifference.  So it’s maybe something of a relief when Roney turns up with a problem.  The excavation has been halted – due to the discovery of what looks like an unexploded bomb.  Roney isn’t happy with the officer in charge, Captain Potter (John Stratton), and wonders if Quatermass can do anything to help.  Quatermass rather neatly manages to persuade Breen to take a look, so the three of them head out to the site.

Stratton would be a familiar television face for decades (much later he would turn in a ripe performance as Shockeye in the Doctor Who story The Two Doctors).  He’s much straighter here (and barely recognisable) as the young officer.  There’s also some familiar faces in his squad, such as Harold Goodwin as Corporal Gibson and Hammer Films stalwart Michael Ripper as the Sergeant.

By the time we reach the end of the episode, many of the blocks of the story are in place, but there’s plenty of facts that are still unclear.  What’s interesting is how the pieces of the puzzle are slowly assembled – basically Quatermass and the Pit is a detective story and we’ll see Quatermass and the others uncovering information in the later episodes by various means (via books, talking to people, experiments, etc).  This is far removed from the thriller-like Quatermass II which operated in a much more straightforward way.

What appeared at first to be an unexploded bomb now looks increasingly odd.  It’s far too large, for one thing.  And the other important fact that Quatermass alone seems to have grasped is that it was below where the skull was found.  And if the skull had lain undetected for five million years, how long has the “bomb” been there? 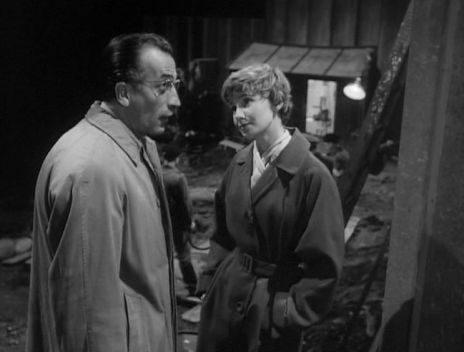 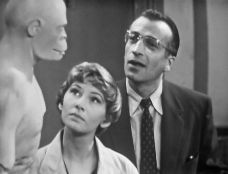 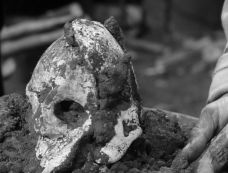 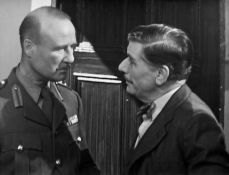 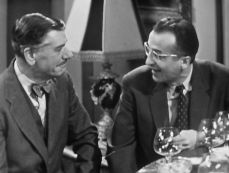 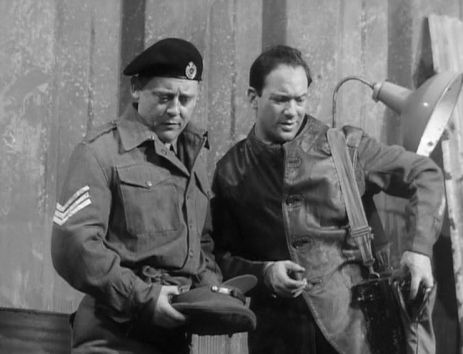 4 thoughts on “Quatermass and the Pit – Episode One – The Halfmen”