Skip to content
HomeQuatermass and the Pit – Episode Two – The Ghosts 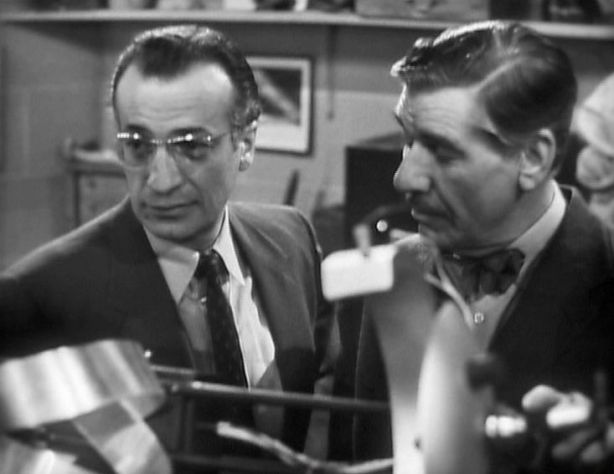 Quatermass and the Pit is as much a ghost story as it is a science fiction one.  This is a theme that Kneale would re-use in the years to come (The Stone Tape) and it’s easy to see why – the clash between science and superstition is a very potent one.  Doctor Who would also draw heavily from this Kneale template over the following decades (The Daemons is a prime example and Image of the Fendahl is probably the Doctor Who story most indebted to QATP).

Whilst the work to uncover the mysterious object continues, Quatermass is intrigued by the derelict house at the nearby Hobbs Lane.  This disrepair wasn’t caused by bomb damage (as it’s clear that only a handful of incendiary devices fell in this area during WW2.  Which also makes Breen’s claim that the object is a previously unknown German weapon rather unlikely).

The discovery that the object is emitting radioactivity (although at a very low level) is enough to ensure that operations are suspended whilst tests are carried out to verify whether it’s safe to continue.  At something of a loose end, Quatermass heads over to the abandoned house to have a look around.  He’s joined by P.C. Ellis (Victor Platt) who knows the history of the place and confirms that it’s been empty since 1927 due to a ghost scare.  Although Ellis was only a child back then, he still remembers the stories and whilst he tells Quatermass that it’s clearly all nonsense, he displays a palpable sense of unease as he moves through the house with Quatermass.  Victor Platt is terribly good in this scene, it’s mostly just exposition (laying the groundwork for the tale of the haunted house which Mrs Chilcott will explain in more depth later) but Platt is able to give Ellis a real sense of character.  Good performances from the minor players are one of the main strengths of this serial.

Two residents, Mr and Mrs Chilcott (Howell Davies and Hilda Barry) have been evacuated nearby, so Quatermass pops in to speak to them.  Barry had previously appeared in Quatermass II (as Mrs Large) and she gives another nice cameo performance here.  It’s obvious that she’s the dominant partner in the marriage, particularly since Mr Chilcott seems to be rather poorly.  “I couldn’t find his long woolies, you know, his clean ones. He may have to wear two pair at once. It’s cold.”  As the majority of the story is set amongst the military, her appearance does lighten the mood a little.

The Chilcotts are staying with Miss Groome (Madge Brindley).  When Quatermass enters, Miss Groome is telling Mrs Chilcott’s fortune with tea leaves.  This tells us that Miss Groome is a believer in the supernatural and is therefore somebody who holds diametrically opposed views from the rational Quatermass.  So his interest in the haunted house does surprise her.  “I thought all you scientists were sceptics” she says.  “We’re open-minded, most of us, or we try to be” he replies.  Mrs Chilcott’s story – mysterious noises, objects moving by themselves, a ghostly figure – is fairly typical, but what’s the explanation?  Miss Groome would no doubt be adamant they were manifestations from the other side, but the obvious inference being drawn is that it may have something to do with the mysterious object – which has apparently lain undisturbed for five million years.

The discovery of another ape skull – this one actually in the object – gives Colonel Breen even more pause for thought.  Anthony Bushell is very solid as the blinkered solider.  He likes things to be logical and rational and as the evidence begins to pile up to the contrary, he begins to lose his grip.  It’s only expressed in a subtle way during this episode, but it becomes more pronounced as the story progresses.  His reluctance to believe the evidence in front of him is highlighted by a report that confirms the radiation dates from five million years ago.  Since he finds this impossible to believe, he’s quite happy to dismiss it – anything that’s outside of his understanding he ignores.  If Quatermass and the Pit is something of a puzzle, then Breen is the sort of man that will desperately try and make the pieces fit – even if it’s clear they don’t.

Quatermass later tells Roney exactly what he feels about his new colleague.  “I told you my Rocket Group’s been taken over.  Well, he’s the official receiver.  He’s a career militarist of the worst type.  Cold, efficient, just biding his time.  That’s my colleague.”  Breen elects to use excavators to quickly unearth the object and its eventual reveal is an impressive moment.  It’s a wonderful piece of design work from Clifford Hatts – it looks substantial and solid.

Whilst some people may feel that this episode hasn’t advanced the plot very far, I’d disagree.  It’s been more about character and atmosphere – and both have been delivered in spades.  The cliff-hanger is also very striking and provides a strong hook into the next episode.  One of the soldiers, upon entering the object, reacts in terror at the sight of a mysterious figure who walked through the wall.  Instantly this recalls to us the stories of the haunted house in Hobbs Lane and the connection helps to tie the various story threads a little tighter together.