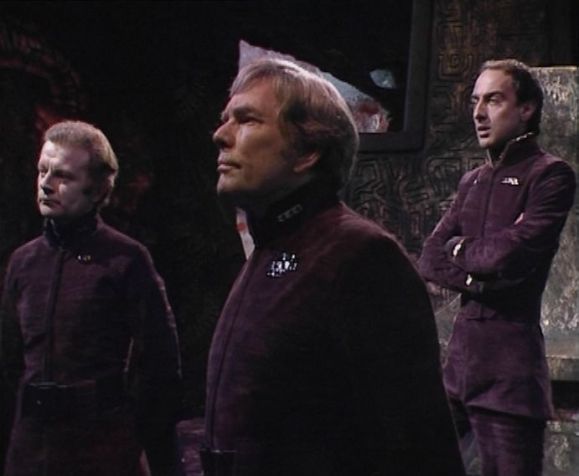 Allan Prior contributed five scripts to Blakes 7 (Horizon, Hostage, The Keeper, Volcano and Animals).  It’s fair to say that none of these episodes would feature in most people’s top tens (unless it was a top ten of least favourite stories).

Prior’s work on B7 tended to range from the competent to the mediocre, which is slightly surprising given his very lengthy list of writing credits.  He wrote over a hundred episodes of Z Cars and also contributed to many other popular series during the 1960’s, 1970’s and 1980’s (such as Sergeant Cork, Armchair Theatre, Dr Finlay’s Casebook, Warship, The Sweeney, The Onedin Line, Secret Army, Juliet Bravo, The Charmer, etc etc).  It’s an incredibly impressive CV, but it’s notable that apart from Blakes 7 he never wrote for any other science fiction or fantasy series.

His debut script, Horizon, is possibly his best.  The science fiction in this one is laid on fairly gently – as it’s essentially a colonial story that could easily have been set in any African country (for the Federation just substitute the British Empire).

The regime on the planet code-named Horizon is one with obvious parallels in history.  The Federation needs the minerals it has in abundance (such as Monopasium two-three-nine) but a full occupying force would tie up too many people.  So the Federation “educates” the elite of the planet who remain nominally in charge whilst the Federation rule behind the scenes and siphon off the resources for their own use.

Ro (Darien Angadi) is a textbook example of a native who has been educated to think and act as a member of the Federation.  His former teacher is now the Kommissar ultimately response for the planet (played to perfection by William Squire) and he’s confident that he can continue to bend Ro to his will.

The heart of the episode is the relationship between Ro and the Kommissar.  Partly this is because the only other native speaking role we see is Ro’s finance Selma (Souad Faress).  The remainder of the natives tend to toil in the mines and are hairy, grubby and mute.  It’s slightly surprising that Ro doesn’t have a council of leaders that he has to report to – that would have created some decent dramatic tension, but restricting everything down to just a single man does work as well.

It’s interesting that Ro is aware that the mortality rate in the mines is high, but he’s just not terribly bothered about it.  To him they’re savages, little more than animals.  The fairly heavy irony that he was in exactly this position before he was lifted up by the Federation never seems to occur to him.

Blake and the others turn up to Horizon after they follow a Federation supply ship.  It’s travelling to Zone Nine – far off the beaten track – and Blake is intrigued.  But everybody else is exhausted from a series of close shaves and it’s fair to say they don’t share his curiosity.  The ratty, bad-tempered banter at the start is a nice touch and it gives all of the regulars a few decent character moments before the episode proper begins.

Blake and Jenna teleport down and are captured.  When they don’t return Gan and Vila teleport to look for them and are captured.  Cally then teleports down to look for them all and she is captured as well.  This leaves Avon by himself (“and then there was one”) apart from Orac and Zen.  We then see Avon wrestling with his conscience – can he simply run out and leave the others?

AVON: If I go alone, can I pilot the Liberator indefinitely?
ORAC: With the help of the automatics, of course you can.
AVON: I know that.
ORAC: Then why did you ask the question?
AVON: I didn’t. How long can I maintain myself?
ORAC: Is that a question?
AVON: Yes.
ORAC: We have concentrated food for one person for a thousand years.
AVON: And our power is self-regenerating.
ORAC: Affirmative.
AVON: Can you plot courses to keep out of the range of any known spaceship manned by the Federation?
ORAC: The battle and navigation computers can handle that perfectly adequately.
AVON: I asked if YOU could.
ORAC: Of course, should it be necessary.
AVON: Failing that, we are powerful enough to resist all but an attack by three Federation pursuit ships at once.
ORAC: Is that a question?
AVON: No. If we go now, we can sail the universe for as long as we like in reasonable safety, provided we keep out of everybody’s way and we do not do anything rash.

When he learns that three Federation pursuit ships are en-route to destroy the Liberator he decides to stay and fight.  Was he ever seriously intending to cut and run?  Maybe not, as I’m sure the pleasure he derived from rescuing everyone else was immense!  And once he teleports down Paul Darrow looks like he’s enjoying himself as Avon turns into a Wild West gunslinger, cutting down Federation troopers left, right and centre.  He nearly blows Blake’s head off as well, but luckily(?) the shot goes wild.  There’s a lovely expression on Gareth Thomas’ face as he deadpans the line “missed”.

If there’s a weak part to the story then it’s when Blake is initially captured and interrogated by both Ro and the Kommissar.  Blake’s quickly able to gain Ro’s trust by telling him that he knew an old friend of his, Paura.  Blake and Paura were both convicts on the ship London, bound for Cygnus Alpha.  This just seems a little contrived – had Blake travelled to Horizion, armed with this knowledge, expressly to talk to Ro it might have seemed more reasonable.

This niggle apart, Horizon is a pretty good stuff.  As I’ve said, William Squire (best known as Hunter in the Thames version of Callan) is perfectly cast as the arch-manipulator.  Darien Angadi also has a decent amount of screen-time as the apparently subservient puppet ruler.  Brian Miller and Souad Faress exist to act as sounding-boards for the Kommissar and Ro respectively, so have less chance to impress – but both are capable enough.

And Sally Knyvette looks rather lovely, which is always a plus point for me.