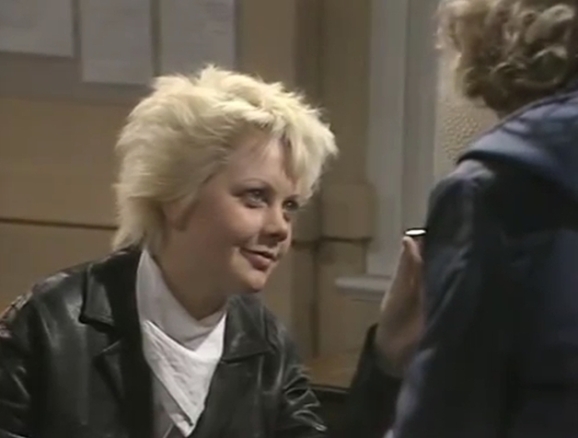 Episode three gives us our first chance this series to catch up with the first years. As has happened before, and will happen again and again in the future, various characters have dropped out and new ones have been drafted in to replace them with no explanations about these various departures and arrivals.

Tracy Edwards and Karen Stanton have vanished (although Karen must presumably still be somewhere in the school since she pops up briefly in a later episode). They’ve been replaced by the somewhat identikit characters of Claire Scott (Paula Ann Bland) and Suzanne Ross (Susan Tully).

Claire, like Tracy, is an old friend of Duane (it’s easy to believe her scripts were originally written for Tracy) whilst Suzanne at present exists mainly to line-feed Claire and join in the general banter, mainly about how fat Pogo is!  It’s difficult to imagine that Suzanne would later become a key figure in the series (during series five to seven) as she’s a very minor character during series four’s run.

But there are some new arrivals in Miss Mooney’s class who are commented on. Julia Farley (Sarah Attwood) is a second year pupil who has been forced to drop down a year due to her poor results. She’s a potentially intriguing character, but sadly only has a major speaking role in this one episode.  Her Grange Hill appearances were Sarah Attwood’s only television or film credits.

Another fairly short-lived pupil is Richard Marks (David Doyle). He’s a pupil who was created to serve a single function – he comes from a poor background and is teased by the others because of this – and once that storyline has concluded there’s nothing else left for him to do.

Most of the episode revolves around a forthcoming school medical and the concerns of some of the pupils. Alan’s worried it’ll reveal his smoking habit whilst the younger girls have other issues. It’s interesting to see how the topic of period pains is delicately handled – the reason for their pains are never spelled out, but it’s still covered quite well.  Claire becomes the audience identification figure – she’s concerned about what’s happening but doesn’t feel she can talk to anyone about it. Eventually she speaks to Susi who’s able to answer her questions and calm her fears.

Pogo manages to lighten the mood after he overhears a girl telling Miss Peterson she’s unable to do games because of the time of the month. He decides that this is a wonderful excuse and tries it with Mr Sutcliffe, with notably less success!