Last time E3 resolved to stop giving Mr Scott a hard time.  Their resolution didn’t last very long though (another example of sloppy script-editing?) as here we see them – even Ronnie – refusing to come into registration.  The reason?  They’re obeying the rule in the staff handbook which states that “pupils must walk in the corridors at all times”.

This is a civil disobedience action which the whole school is indulging in.  But whilst the other teachers are quickly able to take order, Mr Scott remains as ineffectual as ever.  It takes a passing Mr McKenzie to crack the whip and restore the status quo – whilst his apology to Mr Scott (given the general level of anarchy he hadn’t realised a teacher was present) seems to be a further nail in the younger man’s coffin.

Mr Scott and Mr Kennedy have another staff-room heart to heart, which again consists of Mr Kennedy barely managing to keep his temper in check.  But finally Mr Scott seems to have made a breakthrough, as his science class – where he dissects a heart – captures everybody’s attention.

It’s an obvious touch that hardman Trevor would is the one to buckle at this sight (he rushes off to throw up) but the fact that Mr Scott, when given interesting material, is able to command the room offers hope for the future.  There are numerous reaction shots of both the regulars and extras, which helps to sell the fact that the lesson was a success.

Julia and Laura were pretty inseparable during S9 but that hasn’t been the case this year.  Mainly this is due to the fact that Laura was inexplicably absent for the first half of this series, but even now – when they’re both together – there’s a feeling of discord.  This is thanks to Mr Glover, who is keen to discover the ringleaders driving the work to rule campaign and elects to use Julia as a mole.  A skiing holiday is the carrot and Julia seems only too happy to betray her friends, including Laura.  This is an interesting wrinkle, just a pity that it couldn’t have been developed a little earlier (this is one storyline that might have benefitted from being spread across a number of episodes).

Gonch, Robbie and Hollo decide to follow another directive in the staff handbook, which states that skirts should be worn for cricket.  This allows Mr Bronson the chance to utter the following wonderful line.  “You boys in skirts. Come here!”.

Mrs McClusky only makes a brief appearance, but it’s a telling one.  She wonders if, given the general state of affairs, they should have listened more sympathetically to the grievances outlined by the pupils.  Mr Bronson characteristically disagrees – this anarchy must be crushed and crushed quickly.  Mrs McClusky (particularly in her early years) was always prepared to steamroller any opposition – is she mellowing in her old age?

Roland’s sponsored diet, in aid of the Danny Kendal fund, is a boon for Gonch and Hollo who – with a crushing sense of inevitability – are running a book on how much he’s going to lose.  And when Roland’s impressive weight loss starts to make them worry they might lose a fortune, it’s equally inevitable that they decide to nobble him (by dropping handfuls of chocolate bars into his bag).  The old Roland would have scoffed them down without a single thought but the new, improved Roland seems made of sterner stuff.

Banksie’s a hit at Hazelrigg Road, interacting with the children and impressing the staff, but the time he’s spending there seems to be impacting his relationship with Laura.  It’s only hinted at here, but it seems that it’s a place she has no wish to visit.  So when Banksie tells Lucy that he and Laura will be happy to escort her to the craft fair (which is in a wheelchair unfriendly building – hence the need for two people) it’s not to hard to guess the direction this storyline will take.

Donkey Watch.  Harriet’s still not well and even Helen’s baby talk doesn’t seem to be doing any good.  And after the donkey once again nibbles the bushes (“What will Mrs McClusky say?” wails Mr Griffiths, not for the first time) everybody’s forced yet again to ponder Harriet’s future.  Gonch believes that she’d be best off as cat food(!) but moving to the countryside (to a donkey sanctuary) sounds like a better bet.

Praise be!  A pity that this couldn’t have been done some fifteen episodes previously but I believe at long last there’s a light at the end of this interminable tunnel. 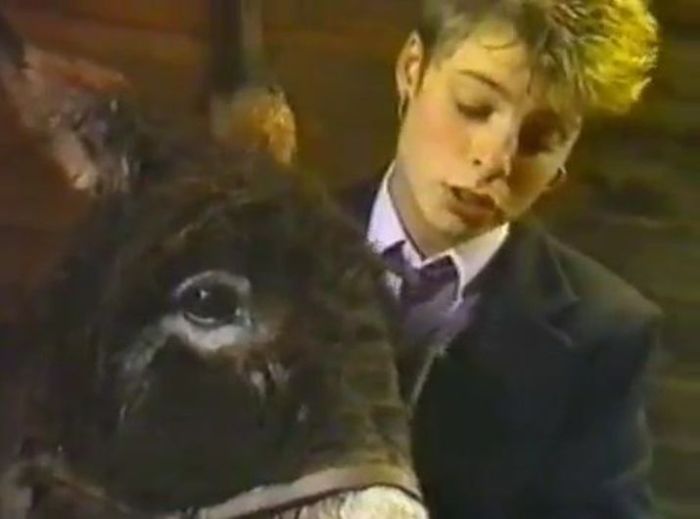