Skip to content
HomeDoctor Who – Delta and the Bannermen 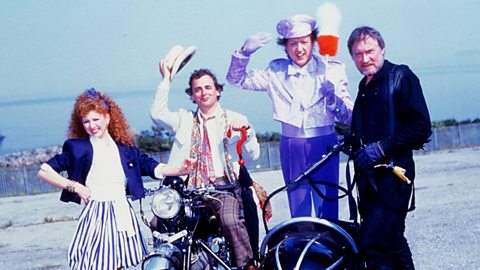 Back in 1987, the rock’n’roll stylings of Delta and the Bannermen seemed to be a quaint reminder of a far-ago age.  Yet more time now separates us from the original transmission (a shade under thirty years) than the gap between the first broadcast and its 1959 setting.  Funny thing time …..

Maybe it’s the retro setting, but time seems to have been pretty kind to Delta.  True, the story remains rather dreamlike and insubstantial, but it’s hard not to warm to it.  On the negative side, it’s a shame that Gavrok remains hopelessly undeveloped – he wants to exterminate the Chimeron race because he wants to – meaning that Don Henderson has to make bricks out of straw (Henderson has a nice line in simmering anger but little else, alas).  Delta herself, as portrayed by Belinda Mayne, is presented with a little more in the script to work with, but this is torpedoed by Mayne’s passionless performance.

I’ve also never been able to decide whether the fact that Weismuller can get straight through to the White House from a humble police box is supposed to be deliberately stupid or whether Malcolm Kholl just hoped nobody would notice.  But given that Weismuller and Hawk are given the job of tracking a satellite with the aid of a very basic telescope, I think it’s probably the former …..

But if the story is somewhat flimsy fare, then the performances more than make up for it.  Stubby Kaye is delightfully amiable as the bumbling Weismuller whilst Richard Davies brings to bear all his sitcom experience when delivering these sort of lines.  “Now, are you telling me that you are not the Happy Hearts Holiday Club from Bolton, but instead are spacemen in fear of an attack from some other spacemen?”

And there’s the rub.  If you believe that Doctor Who should be grim and gun-happy (like, say, Eric Saward) then Delta isn’t gong to appeal.  Otherwise, there should be plenty to enjoy here – although even I, unreconstructed Delta fan as I am, can’t sit through the honey/bees scene without squirming.  There should have been another way.

Had Sarah Griffiths toned down her “Welsh” accent then she might have made a very decent companion.  She certainly works well with Sylvester – the moment when a distraught Ray (miffed that the love of her life, Billy, is making eyes at the newly arrived alien lady) grabs the Doctor for an energetic dance is just one delight amongst many.

Always a pleasure to revisit this one.