Laura isn’t keen on joining Banksie and Lucy at the craft fair, which somewhat annoys him.  It’s very noticeable that Mrs Reagan’s earlier antagonism towards Banksie has now totally dissipated – a pity that we didn’t see this thaw happen though (not for the first time events are taking place off-screen).

It’s initially not clear why Laura doesn’t want to go.  Is she tiring of Banksie or is Lucy the problem?  Laura later confides to Julia that Lucy – and specifically her disability – was the reason.  This isn’t something which reflects well on Laura, but it was inevitable that at least one character would have to articulate this viewpoint.

After expressing surprise that Lucy looked nice (“I thought she’d be twisted and, well, ugly”) Laura then goes on to list a whole litany of things which upset her.  “I can’t even stand people who are fat or ugly or who’ve got birthmarks or who limp or old women with bits of hair growing out of their chins. Can’t stand that”.  Crickey! Clearly Laura is only interested in perfection.

But if Lucy’s presence has highlighted all of Laura’s negative traits then it’s done the opposite for Banksie as working at Hazelrigg School has been a revelation for him.  He tells Lucy that it’s the first time he feels that he’s appreciated and treated like a human being.

Lucy continues to be a character with depths – we’re never invited to feel sorry for her, the fact that she’s disabled is a part of who she is but it’s not something which defines her.  In other ways she’s a typically mischievous teenager (keen to do a bit of shoplifting) and – like Calley and the others – is also interested in fashion and jewellery (both Lucy and Calley buy earrings from Fay’s stall at the craft fair).

Donkey Watch.  Harriet’s finally been offloaded to the donkey sanctuary in Essex which means that a weight has been lifted off Mr Griffiths’ shoulders (and I’m sure also from the viewers).  Helen is a bit teary but I’m sure she’ll get over it.  Bye, bye Harriet.

Ant and Georgina continue to glower at each other.  He’s not terribly pleased that she’s decided to spend her Saturday with Mr Griffiths, Helen and Harriet rather than him.  And when he’s not getting aggro from Georgina then some long-haired fellow pupils at St Josephs are also on hand to taunt him that he’s a Grange Hill lad at heart.  But the truth is that Ant doesn’t seem to be happy anywhere.

Ronnie and Gonch still seem to be a couple.  Their relationship – such as it is – has to be one of the most underdeveloped we’ve ever seen.

Julie’s choosing material for her bridesmaid’s dress, Jackie’s trying on bridal gowns, whilst Zammo’s tagging along – alternately sulking and viewing the assembled wedding paraphernalia with barely concealed horror.  It couldn’t be more obvious that he still believes that they’re rushing into marriage, but he lacks the courage to speak up.

If Zammo’s educational journey this year (he passed just about all his resits) seemed slightly unlikely (he never appeared to be a particularly gifted pupil) then Fay’s journey (she failed just about all of hers) was also slightly surprising.

The reasons are teased out in this episode as it appears that, despite the passage of time, she still hasn’t put Mr King behind her.  She’s mentioned him numerous times during the year which means that his appearance at the craft fair comes as something of a jolt.  First he encounters Miss Booth (also selling her wares) who tells him that Fay’s doing okay (the way he can’t meet her eyes is a telling moment – the guilt he feels is quite palpable).  Fay’s delighted to see him but less delighted when she realises that he’s come with a girlfriend in tow.  Mr King has moved on – new job, new relationship, new life – which only serves to reinforce how in comparison Fay has remained in stasis.

Part of her might have remained hopeful that he’d return and they’d pick up where they left off (a slim part maybe) but now she knows that’s impossible.  The camera is quick to pick up on this as Fay is given an extreme close-up at the exact moment when she realises the truth.  Poor Fay.  She’s somewhat been through the wringer during the past year, but this should hopefully serve as the wake-up call she so desperately needed. 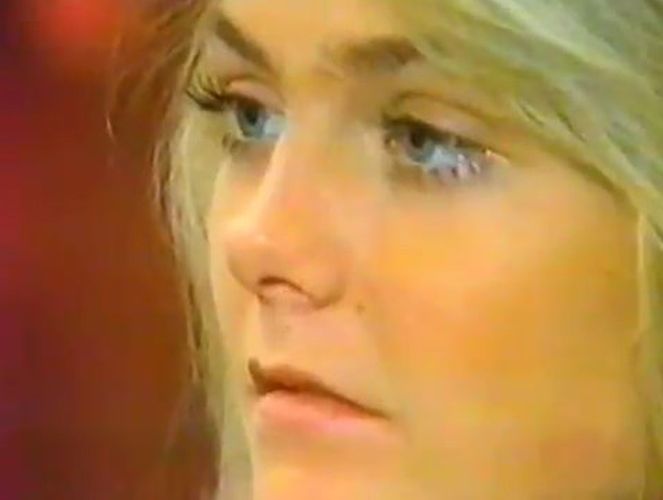