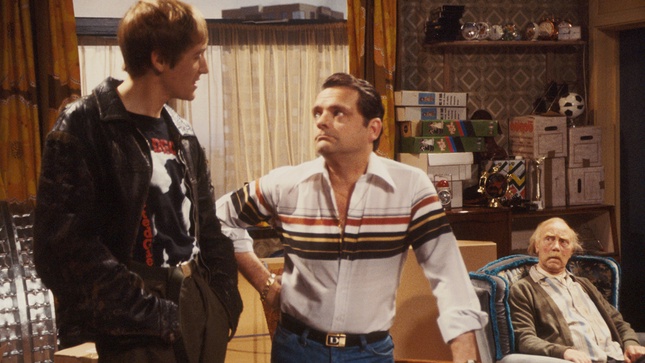 As is well known, Only Fools and Horses took a little time to establish itself as a comedy favourite.  Series one, originally broadcast in 1981, was politely received but it didn’t seem to spark a great deal of interest amongst either the critics or the audience.   This may have been something to do with the Minder effect (Del-Boy Trotter and Arthur Daley trod similar paths to begin with).

But revisiting the early episodes, it’s plain that right from the start all the pieces were in place.  Episode one, Big Brother (8th September 1981) is a good example of this.  As an establishing episode it’s not surprising that it concentrates on the three regulars – Del (David Jason), Rodney (Nicholas Lyndhurst) and Grandad (Lennard Pearce).  Joyce the Barmaid (Peta Barnard) gets a few reaction shots and we encounter Trigger (Roger Lloyd Pack) for the first time, but John Sullivan’s main intention here is to set up the relationship between Del and Rodney.

Familial discord has always been a fruitful source of sitcom material, possibly best exemplified by Steptoe and Son.  Is it fanciful to draw parallels between Big Brother and the original Steptoe pilot, The Offer?  Both see the youngest member of the family desperate to break free from their home environment (although neither are eventually able to do so).  The tone here is quite different though – Harold Steptoe is crushed by his failure to escape from his father’s clutches whilst Rodney and Del, for all their bickering, are happy to be reconciled at the end.

Younger brother Rodney has had a lifetime chafing about how he always gets the short end of the stick, but Del has an instant comeback.

Oh I embarrass you do I? You’ve got room to talk. You have been nothing but an embarrassment to me from the moment you was born. You couldn’t be like any other brother could you, eh, and come along a couple of years later after me. Oh no, not you, you had to wait 13 years. So while all the other Mods were having punch-ups down at Southend and going to the Who concerts, I was at home baby-sitting! I could never get your oystermilk stains out of me Ben Shermans – I used to find rusks in me Hush Puppies.

So Del, following the death of their mother and the disappearance of their father has been in loco parentis since Rodney was a young child. But now, at the age of twenty three, Rodney wants a better future than selling hankies from a suitcase in Oxford Street. Del can’t understand this – to him wheeling and dealing is his lifeblood. It’s a just a pity that he’s so bad at it. This is clear right from the start and it’s his inability to spot a dodgy deal (one-legged turkeys, attaché cases which don’t open) which make him just as a big a victim as his brother. But Del, with his lethal blend of pride and self-assurance, doesn’t realise this.

Tonally, it’s plain that this is very early days. Del is less than gallant when referring to Joycie whilst Trigger carries a faint air of menace. The reason for his nickname (it’s not that he carries a gun, it’s because he looks like a horse) has become a familiar archive clip, although since Del and Trigger have been friends since childhood, quite why Rodney had to ask this question is (in the Only Fools universe) a mystery.  In the real world it’s probable that Sullivan had yet to consider the likes of Trigger and Boycie as regular characters – so their backstories were something that could be sorted later.

Grandad is somewhat cast in the Albert Steptoe role. Fairly housebound and dependent on the others, he’s content to remain a passive observer. But whether it’s mulling over the qualities of Sidney Potter (an actor who always got the black roles), the inability of their computerised chess machine to play a good game of draughts or complaining that Rodney’s bought him a cheeseburger instead of an emperor burger, Lennard Pearce is nothing less than a delight.

Rodney’s plan to run away to Hong Kong doesn’t pan out (since he didn’t take his passport he wasn’t even able to leave the country). Del knew this, but allowed him to wax lyrical about the imagined foreign sights he’d experienced anyway. A little cruel? Not really and by the times the credits roll, the status quo has been restablished as the brothers are reconcilled.

That’s how sitcoms tend to operate, but Only Fools was different.  As the years wore on the characters would develop and grow (whereas most sitcom characters tend to exist in a form of stasis). Big Brother was therefore an important first building block as it gave both Del and Rodney clear backstories and a firm foundation to develop future stories.

3 thoughts on “Only Fools and Horses – Big Brother”