There seems to be a never-ending line of girl groups who are available to be wheeled on to open the show. Today it’s the Flirtations, who have an impressive history and look to be another group that I’ll need to investigate further at a later date. Put Your Hands Together is the song they perform here – all three take turns to trade main vocal lines (although it’s fair to say that some seem better suited to taking the lead than others).

The Krankies are back. It’s slightly baffling now to understand quite how they managed to maintain such a long career, given the thinness of their act (possibly it was a mystery back then as well). The formula is as before – straight man Ian (lovely ruffled shirt, sir) finds himself continually interrupted by the highly irritating schoolboy Jimmy.

A sample joke will give you a flavour of their act. “Do you know anything about general knowledge? Yes, he was a soldier”. I don’t know why, but this time round I found their shtick to be somewhat creepy.

Still, things pick up with George Melly. Along with John Chilton’s Feetwarmers he rampages through The Boogie Woogie Man. They were an act surely good enough to be top of the bill, instead of being relegated to five minutes just before the advert break. Oh well.

Considering he wasn’t a name performer, Richard Jarman (together with the lovely Lara) gets a very generous chunk of the show (some thirteen minutes). It’s a perfect example of the sort of magic act you could expect to see in clubland, utilising props which don’t take up a great deal of floorspace.

Things don’t get off to the best of starts when Richard, preparing for the egg into dove illusion, drops the lid onto the floor. But quick as a flash he picks it up and things carry on. Once this minor miracle is out of the way it’s time to concentrate on the two main illusions.  The first is the very familiar Zig Zag Girl, although back then it was more current – having been invented just a decade earlier by Robert Harbin (one of his performances can be found on Network’s London Palladium release).

The trunk illusion is much older (it was a favourite of Houdini’s) and although it’s not too hard to work out how it’s done, the trick is still a good one.  Both illusions do take a while to set up (which helps to explain why the spot was so long) although it’s a slight surprise to me that Richard was allowed the two big tricks, rather than just one.

No act could be better suited to the Wheeltappers than Joe ‘Mr Piano’ Henderson (he plays the piano, you know). ‘Mr Piano’ leads the faithful in a number of sing-alongs (including You Made Me Love You which seemed to feature every other week). Joe’s amiable pub style of playing is the ideal way to close the show. Not an edition that’s particularly high on star power, but there are worse ways to spend forty minutes. 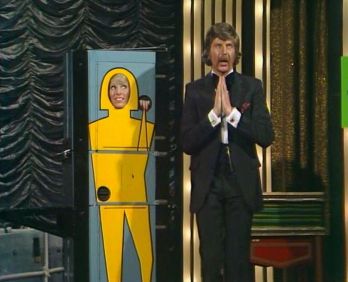