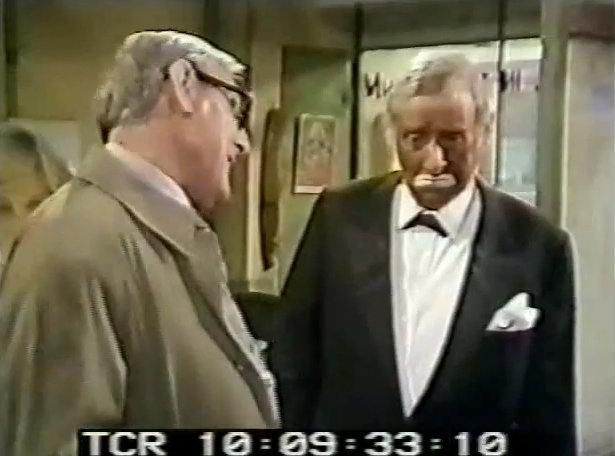 It’s fair to say that Johnny Speight remains a rather controversial figure, more than twenty years after his death.  The news that the recently established UK streaming service BritBox will not carry Till Death Us Do Part has brought his name to the fore once again. Although this, to be honest, is a bit of a non-story. At present, the list of archive television from the sixties, seventies and eighties not on BritBox dwarfs the small amount which is …

With Till Death, the argument (a pretty convincing one) has always been that whilst Alf Garnett often espouses bigoted and racist opinions, the series – and the other regular characters – are laughing at him, not with him.  This defence was also (less convincingly) used for Speight’s LWT sitcom Curry and Chips, in which Spike Milligan (browned up as Paki Paddy) joined his old friend Eric Sykes for a short lived series which was mired in controversary right from the start.

Milligan clearly enjoyed browning up as he later played Mr Van Gogh, an illegal Pakistani immigrant, in The Melting Pot which was written by Milligan and Neil Shand.  Only the pilot was transmitted, the remaining six episodes have remained locked up in the BBC’s vaults for over forty years.

Given all this, what were the chances that a mid eighties BBC pilot featuring Sykes and Milligan (once again browned up) and written by Speight would prove to be a roaring success? Clearly very slim ….

Anybody looking to claim that The Jewel In The Crown is a satire on racism will have their work cut out for them. In the first few minutes Spike explains to Eric why he’s opened a crummy café whilst caked in brownface. “All those Pakistanis come over here and steal our jobs, right? Well, I’ve opened up a Pakistani restaurant and I’ve blacked myself up every night and I steal some of their bloody jobs”. Eric looks perplexed but doesn’t issue a challenge, so the point is allowed to stand.

The thirty five minutes aren’t without some merit though.  Even allowing for the fact that Spike’s Irish accent comes and goes at will, Spike Milligan and Eric Sykes are always worth watching (even if it’s slightly sad that they didn’t seem to have any issue with Speight’s script).

The fact that they’re playing versions of themselves is also interesting (there’s a gentle dig from Spike about the fact that Eric’s spent twenty years making the sitcom I Love Hattie). There might have been some merit in developing this theme had the pilot by some miracle generated a series. And Josephine Tewson and Keith Smith (an old colleague of Spike from his Q days) both add a little touch of quality, even if they can’t do anything with the script either.

I haven’t been able to source a great deal of info about this pilot, save for the usual rumblings that it was never broadcast due to “political correctness”. It’s probably more to do with the fact that it was horribly misjudged and not really very funny.  As a curio it’s certainly worth a look, but it’s hard to see it as any sort of missed opportunity.

One thought on “The Jewel In The Crown, Southall, Middx by Johnny Speight (1985, unscreened pilot)”