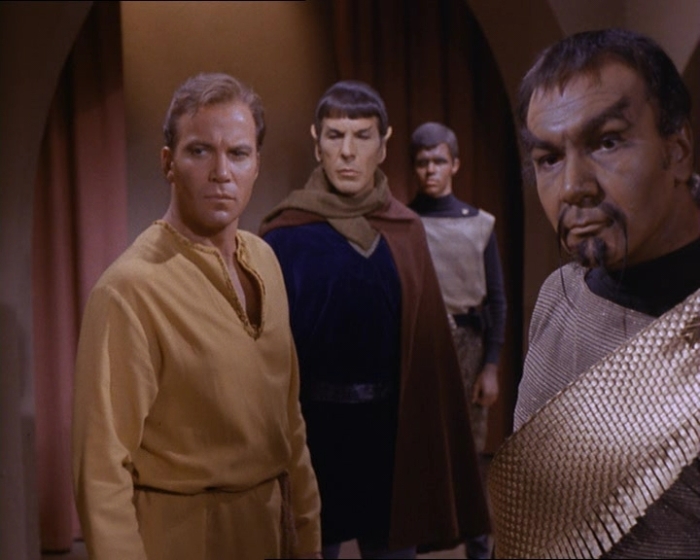 The Federation is at war with the Klingon Empire. This all seems a bit sudden (after all, we’ve never heard of the Klingons before) but that’s one of the drawbacks of episodic television ….

The Klingons are presented to us as violent, oppressive and cruel. You can take them to be either crude caricatures of the Russians or the Chinese (the original script highlighted their Oriental features).  We don’t learn a great deal about their Empire in this story (save that they love conquest) but it’s plain that they’ve been designed as the antithesis of the Federation.

Organia is the first battleground. A strategically important planet, Kirk has orders to ensure it doesn’t fall into Klingon hands (he is authorised to take any steps necessary).  As you might expect with a Gene L. Coon script, this is a pretext for a rather stinging anti-war story.

I can’t think of many other Star Trek episodes which so dismantles the character of Jim Kirk, revealing the flawed man behind the heroic image.  His bad day begins when we witness him being totally infuriated with the council of Elders, led by Ayelborne (John Abbott).  Their smiling passivity and total reluctance either to defend themselves or ally to the Federation baffles him.

Kirk attempts to paint a bleak picture about what life under the Klingons would be like (massive slave labour camps) and then counters this with a rosy vision about how they would flourish as a member of the Federation.

We can be of immense help to you. In addition to military aid, we can send you specialists, technicians. We can show you how to feed a thousand people where one was fed before. We can help you build schools, educate the young in the latest technological and scientific skills. Your public facilities are almost non-existent. We can help you remake your world, end disease, hunger, hardship. All we ask in return is that you let us help you. Now.

All this is no doubt true, but we’ve already been told that Kirk has to acquire the planet for the Federation, so his actions aren’t motivated by simple altruism.  And if the war intensifies, no doubt this planet would suffer no matter who was in charge. The way that the Organians politely decline with a tinge of sarcasm (“we thank you for your altruistic offer, Captain, but we really do not need your protection”) is delightfully done.

Errand of Mercy benefits enormously from two excellent guest performances.  Firstly, John Abbot as Ayelborne.  And secondly John Colicos, who is splendid as the Klingon commander Kor.  Shatner always worked well when put up against strong guest actors and one of the chief joys of this episode is watching Shatner and Colicos face off.  Kor is no simple-minded savage – he may be brutal (although like Kirk he’s only obeying orders) but he’s also articulate and bleakly amusing.

Kor finds Kirk to be a kindred spirit.  Once Kirk is in his power, Kor is keen for the pair of them to share a drink and have a chat about the concept of war.  And however much Kirk might protest that he’s nothing like the Klingons, everything we’ve seen so far would suggest otherwise ….

Coon delivers so many very quotable lines. As the story progresses, it’s difficult to work out who despises the Organions more – Kirk or Kor. Kor articulates his worldview. “Here we are on a planet of sheep. Two tigers, predators, hunters, killers, and it is precisely that which makes us great. And there is a universe to be taken”.

The climax of the story – Kirk, Kor and their two battlefleets are rendered null and void by the Organians – is a breath-taking moment, not least for the manic way that both Kirk and Kor react.  Kirk’s beside himself that someone has dared to stop him fighting (ironic, given how often he’s meddled in the affairs of other planets).

The end of the episode reveals that the Organians are impossibly highly advanced and only took human shape in order to give the Federation and the Klingons a reference point.  This leaves a few questions dangling (indeed there are a few plot holes throughout the episode) but these minor niggles don’t really affect the story too badly.

The Klingon make-up may not look too good today, but that’s about the only negative I can find in a story which I’ve always been happy to place in the top tier.