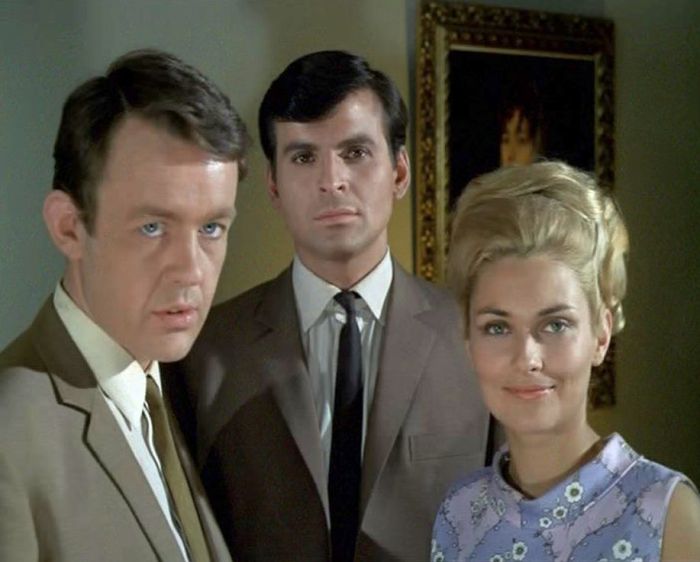 El Caudillo (George Murcell) is the autocratic former leader of La Revada (got to love those fictious ITC South American states). A vain womaniser, he’s been exiled to the Costa Brava, but his life is still in danger. Posing as hired helps, the Champions do their best to keep him alive …

We open in La Revada (really Borehamwood of course, shot day-for-night and with a few exotic ferns dotted about). A cabal of movers and shakers are plotting the death of El Caudillo.

Post opening credits, the Champions are fleecing a casino at roulette – although eventually Sharron comes unstuck. Which is just as well, since cheating with their special powers just isn’t cricket.

El Caudillo might be a fairly hopeless type, but compared to the current regime ruling La Revada (a ruthless military junta) he doesn’t seem all that bad. As so often with politics, it’s a choice between bad and worse.

Our three heroes are all given their undercover assignments. Sharron will be El Caudillo’s secretary, Richard is crestfallen to discover he’s the cook (nice spot of playing from Gaunt here) whilst Craig has the plumb job of bodyguard (Damon deadpans delightfully as Craig wonders if he’s supposed to guard against Richard’s cooking!)

Togged out in a gleaming white chef’s outfit, William Gaunt is in his comic elemenr today. I love Richard’s ever growing enthusiasm as he begins to really relish his role.

The military junta have developed some whacky plans to kill off El Caudillo. Deadly cigars for example, which contain an incurable poison. This seems a bit far-fetched, but then you remember real-life gadgets such as the poisoned umbrella ….

George Murcell is excellent value. El Caudillo is largely played for laughs (he’s shown to have the mentality of a small child who hates to lose at anyrhing) but there’s also the lingering sense that his capricious nature has a darker side. Patrick Magee is solid as Pedraza, El Caudillo’s right hand man, although it’s a role lacking in flamboyance.

But it’s interesting the way that Pedraza skulks about, looking guilty. Is he in league with the junta? It seems not, as nothing’s mentioned about this at the end of the episode, but I wonder if this was a spot of subtle scripting, sowing a seed of doubt about El Caudillo’s long term future.

We’ve already seen that El Caudillo loves to chase women (his maid tends to end up hiding in cupboards) so the anticipation has been stoked for the first meeting between him and Sharron. It doesn’t disappoint – she flashes a bit of leg and looks on adorably as he demonstrates just how many press ups he can do.

The Iron Man has some lovely character interactions between the Champions and El Caudillo. His whispered suggestion to Sharron meets with a stern rebuke from her, which makes it easy to guess exactly what it was he was asking.

And the way he throws away Richard’s immaculately prepared food is like a dagger to the heart of our new chef. Richard takes out his frustrations on some clay pigeons (a pity that the first was suspended by a very noticeable wire).

Even allowing for the themes of assassination and corruption, The Iron Man has a light, comic feel. Gaunt, Damon and Bastedo are all interacting very well and this is one reason why I’ve always enjoyed this one. The Iron Man rates a score of three and a half out of five.

2 thoughts on “The Champions – The Iron Man”