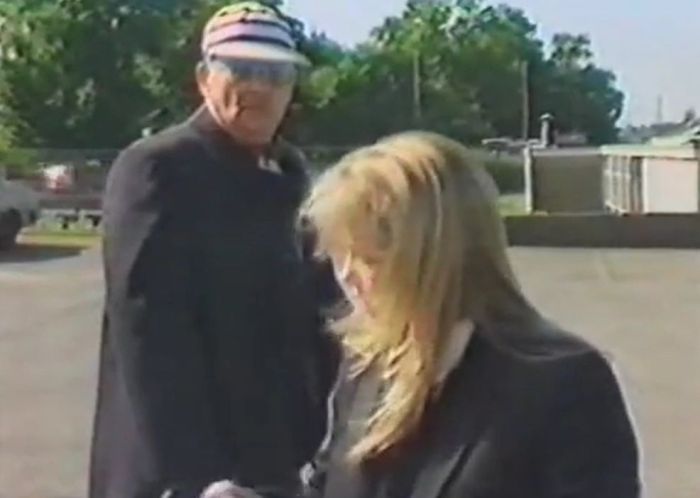 Robbie’s grumbling about the stake money he paid to Trevor for the horse that didn’t win – he wants it back (Mauler is also keen to recover his funds). This suggests that the concept of betting isn’t particularly understood round Grange Hill way. Since nobody forced them to make the bets, for once I’ve a smidgen of sympathy for Trev.

Mr Bronson’s on his bike (nice cap, sir). He attracts the derision of Ziggy, Calley and Robbie (and just about everyone else) en route to school. But one person who remains totally oblivious to his mode of transport is Ronnie, which is a little unfortunate as she, riding her new moped, has a slight collision with him.

The fact she doesn’t have any recollection of breezing past him does rather suggest that she’s going to be a menace on the roads. So I have to sympathise with Mr Bronson on this, although we’re plainly meant to be on Ronnie’s side.

I get the feeling Mr Bronson isn’t in a very good mood today. The next person to feel his wrath is Mr Griffiths, who politely tells him that bicycles aren’t allowed in the school. This cuts no ice with Mr B who bellows at him to move aside. There’s a nice bit of comic business from George A. Cooper in this scene –  the way he recoils ever so slightly when he’s verbally attacked is a decent touch.

When telling Mr Robson about the way Mr Bronson sabotaged Danny’s job prospects, Mrs McClusky is very subdued and emotional.  Whether this was played as scripted or Gwyneth Powell made an acting choice, I’m not sure. It’s rather odd either way though – especially since at present nothing is known about Danny’s whereabouts.

Matthew and Clarke continue the hunt for Clarke’s missing bike. Now they have flags and lights to signal to each other over great distances. Ho hum. Every day I pine a little more for the days of missing clarinets ….

Mr Bronson has bad news for Helen. Her work experience at the engineers is off, instead he’s got her a placement at an insurance brokers. The action quickly moves away from this though, as Mr Bronson hears the roar of a moped engine and angrily sets off in pursuit.

Ronnie, earlier forced to park her moped outside, has now brought her damaged bike into school in order to make running repairs, with the affable Mr Mackenzie on hand to proffer some useful suggestions.

Mr Bronson doesn’t spot his fellow teacher when he comes blazing into the workshop though. Oh, and you have to say that Mr Bronson must have very acute hearing to pick out the faint roar of an engine from his office (since it’s quite a distance from the workshop). Mr B and Mr Mac have a brief but highly entertaining slanging match, which only strengthens my suspicion that Mr Bronson is teetering on the edge of a nervous breakdown. 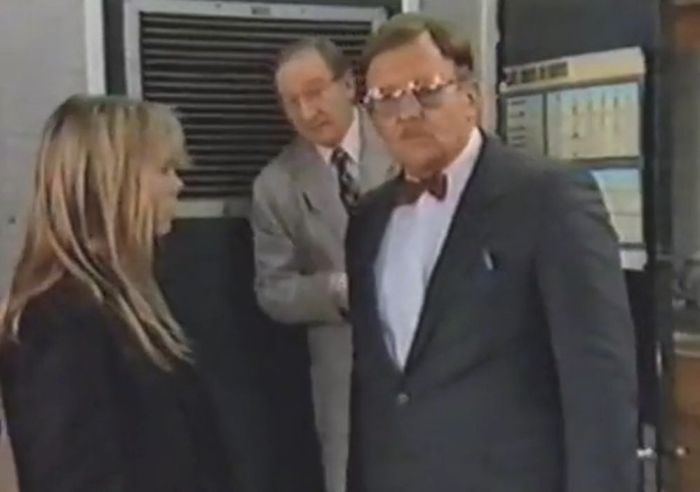