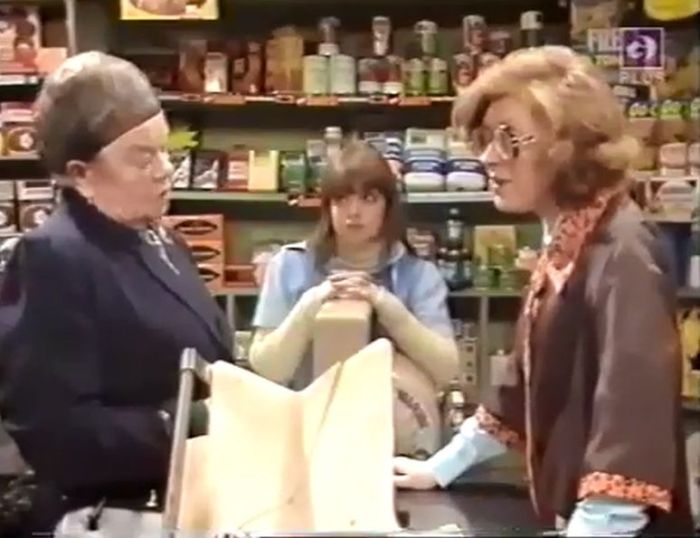 We open in the corner shop where Renee and Elsie are discussing Hedy Lamarr and Victor Mature, much to the general bafflement of Tricia (this is a quick way of establishing that Renee and Tricia live in very different worlds and so are unlikely ever to become bosom friends).

Ding! goes the door. And there stands the imposing, unsmiling Ena Sharples. First she raises an eyebrow at the tardy Elsie (who should already have been at work) before making her way over to Renee.  It’s hard not to be reminded of that iconic scene in the first episode, which saw Ena ruthlessly interrogate the then new shop owner, Florrie Lindley.  This scene doesn’t have the same impact, but as with Florrie you get the sense that Ena is putting Renee under strict probation.

Like the previous episode, this is another scene where Tricia is placed in the centre of the frame, unspeaking, whilst the others (in this case Ena and Renee) do all the running. Maybe it’s just a coincidence, but it reinforces the notion that Tricia seems to be rather powerless and remains dependent on the actions of others.

Tongues continue to wag, re the fact that Ken is living in sin with a married woman. Mrs Walker – never backwards in coming forwards – makes her royal proclamation. She’s quite fair though – telling Ken that whilst she doesn’t approve, she also sees that matters are difficult (in the period when Wendy is waiting for her divorce). Ken wisely doesn’t stop to debate the ins and outs.

Fred’s in the Kabin, looking rather smart. Why’s that? Well, he’s once again trying his luck with Rita. She casually turns down his invitation to go to the cinema (seemingly more interested in her fingernails than him, which should have been a danger sign). He won’t give up though, and bravely hopes that she’ll join him in the Rovers later for a drink. Poor Fred, he seems fated to always be unlucky in love. Or indeed, so unlucky that he never even gets a sniff at the chance of love ….

Emily is the latest to learn about Ken and Wendy. “That’s nice” she says, partly embarrassed and maybe slightly shocked. Although once the news sinks in, Emily’s not one of those – like Albert and Ena – who disapproves. Wendy, tiring of this piecemeal reveal, tells Ken that they might as well go to the Rovers and get it over with.

An extra with a bushy moustache is the first in the Rovers to react. He’s slap bang in the centre of the frame, behind Ken and Wendy, so you can’t help but look at him for a brief moment. Things go off pretty well – Ernie and Elsie are welcoming, although Mavis does confide to Alf that the lovers are being rather bold. Man of the world Alf counters that it’s the only way to be (“it’s like being a lion tamer, never let them know you’re frightened around here, they’ll tear you to pieces”).

Ena’s not happy with the arrangement, but for now she doesn’t confront Ken – instead she simply makes her displeasure plain to Mrs Walker.

Back home, Wendy’s knocking up a nice salad for Ken. It’s certainly different fare from the egg and chips that Stan no doubt would be eating – another obvious signifier that Wendy’s a fish out of water.

Fred’s dressed up once again, which impresses Bet (or so she says). Fred – ever the innocent – asks her about Rita’s current relationship status and Bet advises him to go for it (“fill yer boots”). You’d have thought that Fred would have known Bet long enough to be aware that she has a very malicious streak. Bet is well aware that Fred doesn’t stand a chance, but no doubt will enjoy watching him fail miserably …. 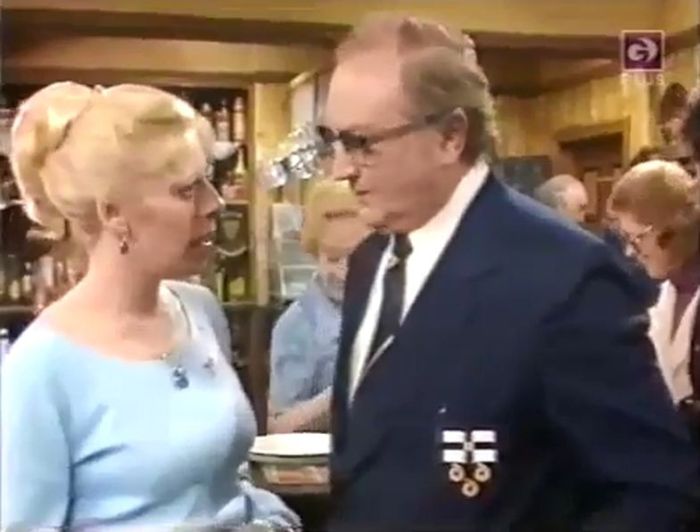 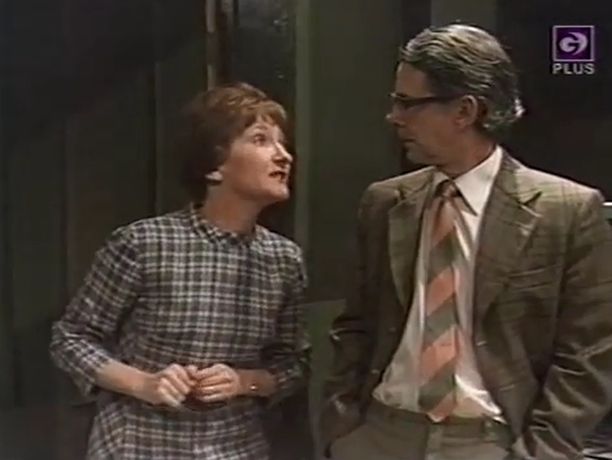 With her aunt away for a few days, an anxious Mavis doesn’t fancy sleeping in the house by herself. The always hospitable Emily instantly offers her a bed. Unfortunately Ernie wasn’t consulted and doesn’t take the news well. And this sets in motion a chain of misfortune for him ….

When Mavis bounds through the door he does his best to hide his irritation (his best isn’t terribly good though) and heads out to the sanctuary of the Rovers. There he runs into Alf and Ray, who are looking forward to a charity stag night at the Gatsby Club – and guess what, they just happen to have an extra ticket.

Ray’s already proven to be a sneaky sort, as he’s convinced Deirdre that he’ll be working on an all night job (as opposed to swilling pints and ogling strippers). As for Alf, he doesn’t seem to have any sort of personal commitments to worry about (at this point in the series he’s still a character who we never really dig into – he might have his private traumas, but we’re not privy to them). But Ernie is a man of solid respectability.  A lay preacher, with a loving – if rather stern and humourless at times – wife. You can just sense that this night isn’t going to end well.

His excuse to Emily (to explain where he’s off to) is a good ‘un – he’s been asked to play piano down the Legion for the Easter Monday concert. Well he can’t disappoint the old folks, can he? With every word he utters, a web of deceit is spun just a little tighter ….

Also bubbling away in this episode are the first stirrings of Annie’s plan (well, she claims credit for it) for a pub Mastermind quiz. Stan – being a devote of Manchester United – looks like he’ll do well, even if Mrs Walker finds it difficult to imagine Stanley Ogden as a Superbrain! Hilda springs to his defence though.

In the scene (14:46) where Mrs Walker, Bet, Stan and Hilda are discussing the quiz, I found it hard to take my eye off the extra slap bang in the middle of the screen. I think it was his striped cap.

The attractions down at the Gatsby are wonderfully non-risqué, as befits a programme broadcast at 7:30 pm. A belly dancer called Fatima (Vicky Day) briefly wiggles her belly button in the direction of Ernie, who laps it up (as it were). A stripper, going by the wonderful name of Fifi LaTouche (Cindy Trueman), throws her bra at Ray, who comments that “you don’t get many of them at Tesco’s, mate”.

It’s all good unreconstructed male fun then, although these scenes are intercut with shots of the blissfully innocent Deirdre and Emily, which drives the point home that the married chaps are being a little naughty.

Your compere for the evening is Gig Prince (Bernard Wrigley). This was Wrigley’s first Coronation Street role (he’d rack up another five between 1977 and 1999).

The evening’s really beginning to go with a swing, but then Det. Insp. Conroy (John Pickles) takes the mike to inform the well-oiled punters that a police raid is now in operation. Oops, that’s a bit unfortunate. 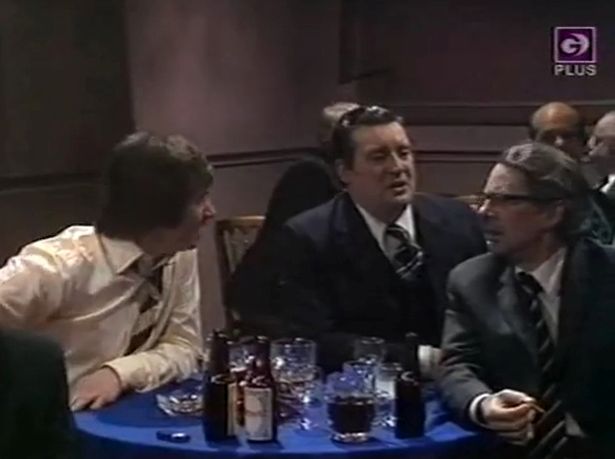 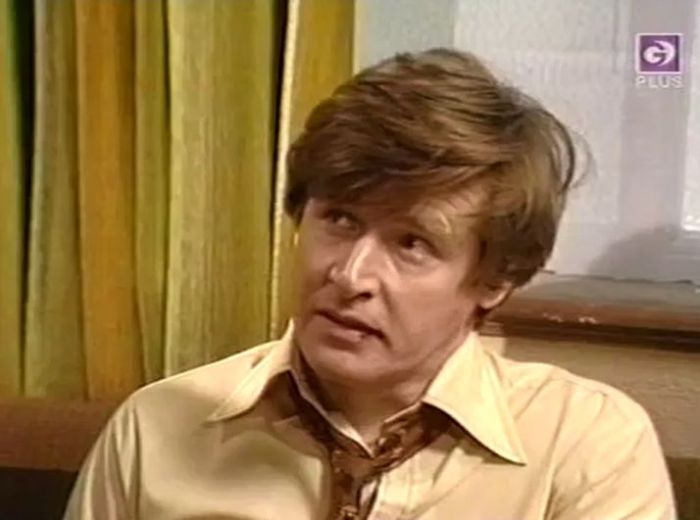 Gail and Tricia are currently in charge at the corner shop. This is something that Bill Podmore was keen to change – believing that the shop should be run by an older hand. It’s difficult not to disagree with him, as the pair aren’t terribly good in a crisis.

The opening of today’s episode is a case in point. Gail pops round with Ken’s groceries, only to find him still spark out on the floor (although we’re denied the moment when Gail clapped her eyes on him). She comes squawking back to the shop in a right old tizzy (“covered in blood he was”). But since Ken wasn’t (after all. he was only felled by one little punch) I think this is good evidence that if you had to rely upon Gail as a witness, you’d be in dead trouble ….

Elsie gets a job at a local clothes shop, Sylvia’s Separates, after impressing the hoity toity proprietress Sylvia Matthews (Rosemarie Dunham). Elsie will remain here for the rest of the year, although not that many exciting (or interesting) storylines are generated from this location. Today’s visit from a customer (played by Roly Poly to be, Maureen Morland) is a bright start though – even if most of her scene was cut out of the Granada Plus repeat.

Len looks after Ken. Experienced old hand Len isn’t buying Ken’s feeble story about slipping over – he can spot the mark of a jealous husband a mile off.  Len gleefully tells Ken that if he (Len) played around then it wouldn’t affect his position as a local councilor, but Ken’s dalliance with one of his lecturers won’t go down at all well with the bigwigs at the Welfare Department (where Ken works). This seems a little unfair, but then life’s unfair.

Wendy pops round to tell Ken that she’s left her husband. End of part one …. 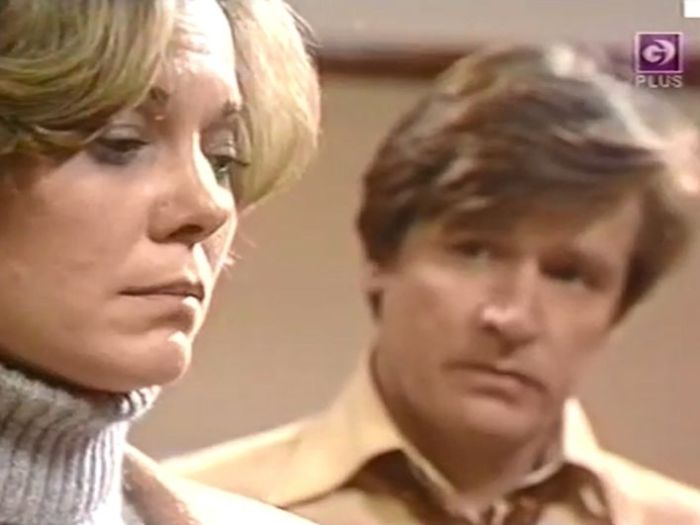 Part two sees the pair enjoy another heart to heart at the kitchen table. It’s quite a lengthy scene with Susan Tebbs making most of the running.  Ken assumes that Wendy will now be moving in with him, but she shatters his illusions on that score. There then follows some raised voices, harsh words and recriminations.

And if you thought Ken’s day couldn’t get any worse, then it does when Roger later turns up. At least this time he’s not come to fight – instead the pair have a fairly civilized conversation over a cup of tea. We’ve already had Susan’s view of their marriage (Roger as a jealous, controlling bully) so now he’s allowed to have his say and comes across as a reasonable sort of bloke.

This leaves Ken caught in the middle. He still wants Wendy, but within the space of an episode his relationship with her has been shown to be on much rockier ground than he belived. Previously her marriage seemed to be all but over, but is that actually the case? This is something that a still bruised about the face Ken is left to mull over. 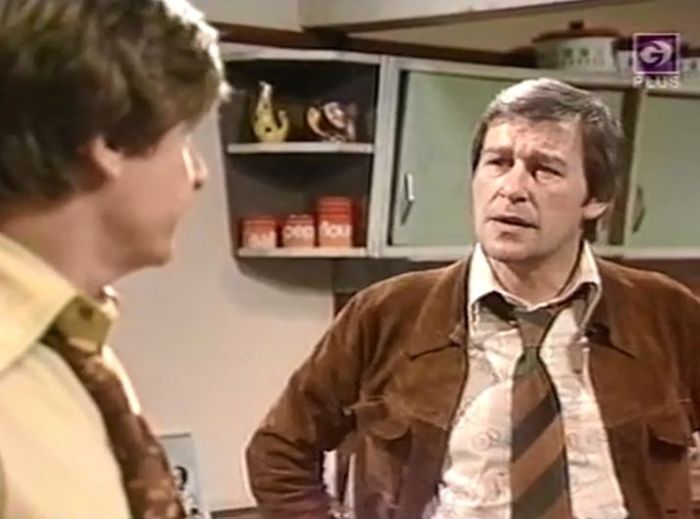