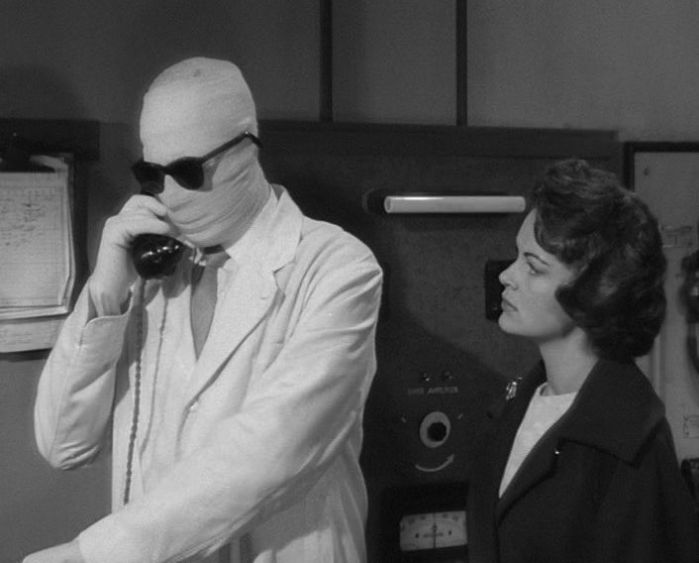 Brady is persuaded to board a Russian trawler in order to help a sailor who wishes to defect.  But he doesn’t know that the Russians have developed an ingenious device which allows them to “see” him when he’s invisible ….

Shadow on the Screen is somewhat clunky.  This is partly due to the wide array of false Russian accents on display but some of Ian Stuart Black’s dialogue is also rather stilted, especially in the early scenes.  Brady is visited by Bratski (Raymond Phillips) a man who has dedicated his life to rescuing dissidents from behind the Iron Curtain.  Whilst Bratski is impassioned, Brady is non-committal about pausing his researches in to order to help Stephan Vasa (Edward Judd).  Phillips doesn’t really convince and things aren’t helped by the very earnest speech then delivered by Brady.

Week after week refugees escape from the tyranny of Eastern Europe.  They jump ship, smuggle onto trains, cut their way through barbed wire.  Each step calls for human courage and suffering.

This sort of polemic doesn’t feel natural – since it’s hard to believe anybody would actually speak like that.

Edward Judd doesn’t do a great deal, but it’s nice to see him nonetheless (if you haven’t caught it before, then I recommend the classic early 60’s British sci-fi film The Day The Earth Caught Fire, which features a fine performance from Judd).  Vasa’s wife Sonia (Greta Gynt) is also lightly sketched and is chiefly memorable for her expressive facial contortions in the opening scene once Vasa is dragged back onto the ship (after an unsuccessful attempt to make a break for freedom).

But if the main story is a little unengaging, there’s plenty of compensations elsewhere.  Brady goes invisible and is driven around by Dee.  The only way we know he’s there is courtesy of his cigarette, which pleasingly bobs up and down every time he talks!  Such a simple effect, but it really sells the illusion that he’s sitting in the passenger seat.

These scenes also have a pleasant travelogue air as Dee drives around the eerily deserted streets of London (which more than anything helps to date the story) and past various notable landmarks.

There’s a lovely touch of comedy as Brady encounters a woman in a lift, not once but twice, who he confounds each time with his invisible ways.  She’s played by the peerless Irene Handel which is the reason why these short scenes are such a joy.

The Invisible Man detector is a handy gadget, although unsurprisingly it’s not something that turns up again (it’s pretty obvious why – since it rather negates Brady’s USP).  There’s fun and games during the closing minutes as Brady – kept captive on the trawler – uses all the invisible tricks at his disposal to gain his freedom and that of Vasa.

It’s fairly simplistic stuff then, but if the twenty-five minute format always means that character development rarely rises above the perfunctory level, conversely it also allows the episode to rattle along at a fine pace.