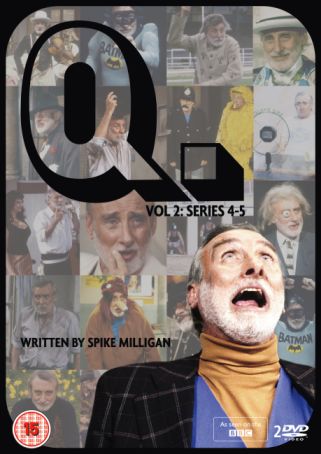 The formula remains the same – scripted by Milligan and Neil Shand, Q8/Q9 offers up another twelve episodes of unique comedy.  Familiar faces from previous series – John Bluthal, David Lodge, Alan Clare, Stella Tanner, the remarkably curvaceous Julia Breck and Keith Smith – return for Q8, whilst Bob Todd makes his Q debut.  A familiar face from his years with Benny Hill, be slips seamlessly into the fold.

Todd was an excellent utility player and quickly became a key figure in many of the sketches (similar to Peter Jones in Q6), Bluthal’s gift for mimicking Hughie Greene and others is put to good use again, Keith Smith has some nice moments (most notably dangling upside down on a rope), David Lodge (he starred in Cockleshell Heroes you know) is always a joy, Stella Tanner handles all the non-glamorous female roles with aplomb, Alan Clare is still (deliberately) a terrible actor whilst Julia Breck unashamedly provides more than a touch of glamour. 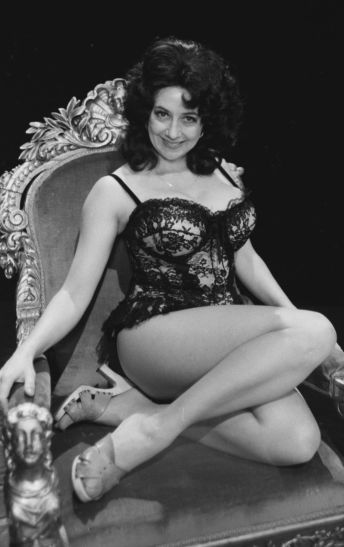 Q8, like the three previous series, is almost impossible to characterise.  It delights and baffles – sometimes in equal measure, although sometimes the balance decisively tips one way or the other.

Q often seems to be teetering on the brink, with all the cast, especially Spike, frequently having to fight the giggles (often not very successfully). Most sketch shows tend to break the fourth wall occasionally, but few ever played about with the artifice and conventions of television like Q did.

Having said all that, some elements are quite trad. Proceedings tend to kick off with Spike behind the desk, reading a series of news items which depend on wordplay. Not too dissimilar from The Two Ronnies …..

But after the relative sanity of the news we rush headlong into the first sketch of Q8. Stella Tanner is a housewife, Spike is her husband. Out of nowhere a pantomime horse, wearing pyjama bottoms, comes clopping across the screen to the sound of The Onedin Line theme.

This gets a polite reception from the audience, but Spike clearly wanted more. “Well, that didn’t get much of a laugh, ladies and gentlemen. I don’t think you understood the full nuance of that joke.” This is typical Spike – toying with the audience (both in the studio and at home) by producing moments which aren’t particularly funny, but then forcing the laughs to come by various methods. Bringing an elephant on seems to do the trick here.

The sketch then moves to a doctor’s office, where the doctor (Todd) is, naturally enough, dressed as Adolf Hitler. Spike drops his trousers to reveal he’s wearing stockings and suspenders whilst a football theme (Tony Gubba on commentary duties) continues. And when there’s nowhere else to go, all the cast edge towards the camera, repeating the mantra “what are we going to do now?” 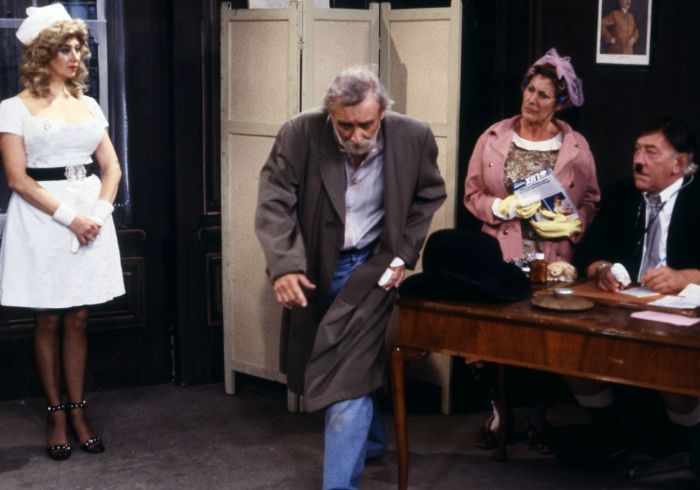 And that sketch, in a nutshell, sums up Q. You have to be prepared to buy into Spike’s world and go with the flow – if you’re looking for well constructed comedy with neat punchlines you’re very much in the wrong place. Staples of the previous series (such as blackface and Irish jokes) remain very much in evidence, meaning that those who are easily offended are definitely in the wrong place.

Spike’s obession with Adolf Hitler remains as constant as ever. Hitler highlights include his song and dance act as a contestant on Opportunity Knocks. The Royal Family are also regular targets (the sight of the Royals all wearing tubas on their heads is an unforgettable image).

The musical spots throughout Q8 and Q9 are provided by Spike and Ed Welch, who perform a selection of their own songs. Spike’s skills as a comic songwriter are well known, but here we have an opportunity to hear some of his non-comic material (as well as providing him with a chance to occasionally play the trumpet). These spots offer the audience a few moments of calm each week.

Later highlights of Q8 include a typically surreal sketch which mashes up traffic wardens and WW2 (and also features stripteases from both Julia Breck and Bob Todd – something for everyone then). Johnny Vyvyan, a highly distinctive stooge probably best known for his appearances with Tony Hancock, makes a few brief appearances. Spike’s tribute to the late Sir Edward Elgar, utilising the B-flat garden hose, is yet another typically unique Q moment.

After being absent for a few shows, David Lodge makes a welcome return for a sketch where he and Spike demonstrate how different nationalities would deliver that old chestnut, “there’s a fly in my soup.” With Katie Boyle on hand to provide scores, ala the Eurovision Contest, it’s a typically ramshackle few minutes with both Spike and Lodge (but especially Spike of course) barely able to control their giggles. Michael Parkinson pops up in the last episode of Q8 to take part in another ramshackle skit.

It’s business as usual for Q9. Spike and most of his regular band of contributors (apart from Stella Tanner) return.

The first Q9 sketch has a WW1 theme, featuring Alan Clare as an umpire (with ridiculously large shoes) overseeing a battle between the Germans (Spike) and the English (Todd). It gets much stranger from there on in, although since Julia Breck makes an appearance in a remarkably tight top it’s inevitable there will be a reference to knockers ….

Spike dresses as Max Miller for an undertakers sketch, whilst Breck is dressed in very little (there’s clearly something of a theme here). Lounging on the other side of the set is Raymond Baxter, yet another familiar BBC face making an unexpected appearance. Baxter, a long-time presenter on Tomorrow’s World, is the ideal host for a feature which promises to “defeat the cemetery shortage” by “firing your loved one into outer space”. Baxter’s authoritive persona and his scripted disdain at the lines he’s been given helps to make the sketch even funnier.

Later in the series there’s a sketch set in a British Rail lost property office. Spike is the attendant, dressed as the Lord Chief Justice of England, and proceedings kick off with Spike and Bob Todd conversing in morse code. Say what you like about Q, but it’s never predictable. Todd can barely control his giggles, whilst David Rappaport passes by purely so that Spike can make a groanworthy pun. Throw in a spot of blackface, Keith Smith as a ghost and David Lodge dressed as a woman and you’ve got everything that made Q the series it was in highly concentrated form.

One of the notable things about Q9 is the way in which the audience is involved. The news items feature regular cutaways to the audience and on other occassions Spike will stop a sketch if he senses things aren’t going well in order to seek feedback from the audience. It’s always interesting to see exactly who turned up to watch these shows (something of a cross-section it must be said, with both young and old represented).

Bracing and baffling, but never boring, Q8 and Q9 are further examples of the skewered genius of Spike Milligan.  Whatever era of British comedy you love, you’re bound to get something out of this set so, like Q Volume 1, it’s an essential purchase.

Hopefully There’s A Lot of It About (Q10 in all but name) will follow shortly, maybe with some of the Milligan miscellanea from his time at the BBC, but if even it doesn’t, at least all that exists of Q (bar a few small trims for rights reasons) is now available on shiny discs, something which just a year ago would have seemed highly unlikely.