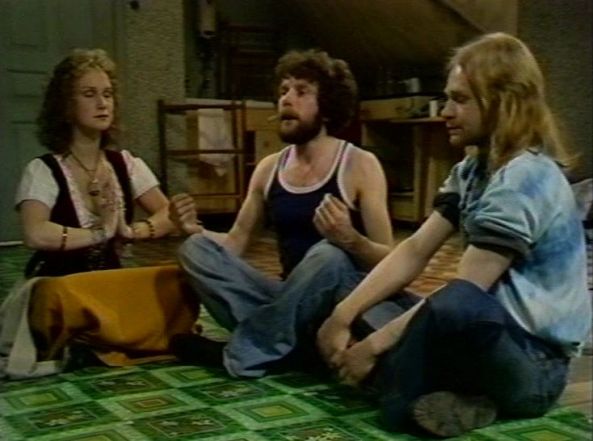 Baubles, Bangles and Beads opens with a scene that could have come from The Sweeney.  A police car is in hot pursuit of another car which contains three dangerous-looking characters (played by Brian Glover, Johnny Shannon and Frank Jarvis).  They’re desperately looking for a place to stash a bag of stolen jewellery, but the police car is too close behind.  In desperation they fling it out of the window and it lands in somebody’s back garden.  Unfortunately for them, it doesn’t remain there for long …..

Given how much of Dixon is lost (only thirty two episodes exist from over four hundred made) it’s hard to get a feel for the variety of stories that the series might have tackled.  And one thing we haven’t seen so far with the colour episodes is one played for laughs, until Baubles, Bangles and Beads.

It’s an interesting culture clash as we see three old school villains – Chuck (Brian Glover), Bert (Jonnny Shannon) and Syd (Frank Jarvis) – confronted with the bewildering world of alternative religion.  The bag of jewellery was found by Eric (Leon Vitali) who has been squatting with Phil (Peter Denyer).  Both are seeking enlightenment – although Phil seems to be further down this road than Eric (which is something he takes great pleasure in pointing out to his unfortunate friend several times).

Eric’s a simple trusting soul whilst Phil is rather humourless and dogmatic.  When Eric expresses dismay over Phil’s purchase of tomatoes (Eric can’t eat them as they make him sick) Phil has no sympathy.  “That’s what I call giving in to your lower centres. Don’t you realise the body is always trying to subvert your higher consciousness?”

They move from the squat to another location and in the room opposite is Marion (Kitty Stevenson) and several of her friends.  Like Eric and Phil, Marion and the others are also seeking enlightenment, although they do so in ways that shock Eric.  When he pops over to ask for a match, he rushes back to Phil to tell him that they’re meditating – but with no clothes on.  Phil takes the news quite calmly.  “That’s nothing. That’s your trouble, that is. You’re carnal oriented. I’ll go see ’em.”  Marion later explains that “to deny the body, one must first see it as it is, in all its gross intransigence.”

She’s learnt this from Guru Rhum Rhaji.  His Temple – the Temple of Godly Effulgence – is close to their flat and Eric, iimpressed with what he’s learnt about him, joins Marion to pay homage.  Eric’s delighted to hear that Rhaji doesn’t charge people to enter his Temple (unlike Phil’s guru, Shashti Ap Davies, who requires 10% of all his disciples earnings).  Rhaji is pleased to accept gifts though – although he refuses the one offered by Eric (a rather indifferent picture).  So the next time he goes along, Eric takes something that he’s sure will be acceptable – the bag of jewellery.  And unsurprisingly, Rhaji accepts this offering.

Rhaji bears some similarity to the likes of the Maharishi Mahesh Yogi.  By the mid seventies, he would have been best known by many people for his brief association with The Beatles (and also for their later denunciation of him as a fake).  Baubles, Bangles and Beads also takes this line – that some religions are nothing more than a con.  As Sgt Wills says, the people who believe (like Eric, Phil and Marion) are decent enough, but the inference is they’re nothing more than fools being misled by tricksters.

This is made plain when Rhaji and his sidekick are exposed as two very English con-men – Ernie Bishop and Gus Todd.  This is a funny scene (although the fact they’re browned up and affecting cod Indian accents probably means that not everybody will see the joke).  Once they’ve been rumbled by Dixon, they remove their false beards and turbans (with Gus changing from an Indian accent to a Cockney one, telling Dixon that it’s “nice to get this clobber off. Don’t half make you sweat, you know.”)  Ernie’s unrepentant, telling Dixon and Wills that “we’ve all got to earn a crust haven’t we?”  He then admits that there’s “more money in religion, pays quite well.”

Although the message of the story may strike some as a little narrow-minded, the comedic performances of Peter Denyer, Leon Vitali and Kitty Stevenson make up for it.  Denyer (who died far too young, at just 62 in 2009) had two signature roles – Dennis Dunstable in Please Sir! and Ralph in Dear John.  Both of those characters were rather dim, as is Phil here, but the difference with Phil is that he doesn’t realise it.  Denyer perfectly captures Phil’s parrot-like nature (it’s clear that everything he says has been learnt by rote from Shashti Ap Davies and he has no original thoughts of his own).

Leon Vitali also appeared in Please Sir! (although just one episode) and later was a regular in the spin-off series The Fenn Street Gang.  He also seems to have been a favourite of Stanley Kubrick (appearing in both Barry Lyndon and Eyes Wide Shut).  Although Eric seems somewhat naive, he ends up in a much better position than Phil – since he elects to stay with Marion (who’s going to teach him mediation and maybe other things).  One delightful scene later in the story occurs when Marion decides that the only way for Eric to conquer his carnal thoughts is to confront them head on – and as the camera tastefully pans away, the audience can guess the rest.

This was Kitty Stevenson’s sole television credit, which is a little surprising since she gives a deft comic performance.  Elsewhere, Brian Glover, Johnny Shannon and Frank Jarvis are three very familiar television faces who help to enliven proceedings.

This is one of two episodes from series twenty one that only exists as an off-air recording (presumably made at the BBC, although domestic video recorders were available at the time).  There’s some picture interference, but for a recording of this age it’s not too bad.  It’s obviously several rungs down from the original VT, but it’s better to have it than not.

An unexpected comic episode, it may not be to everyone’s tastes but I found plenty to enjoy.