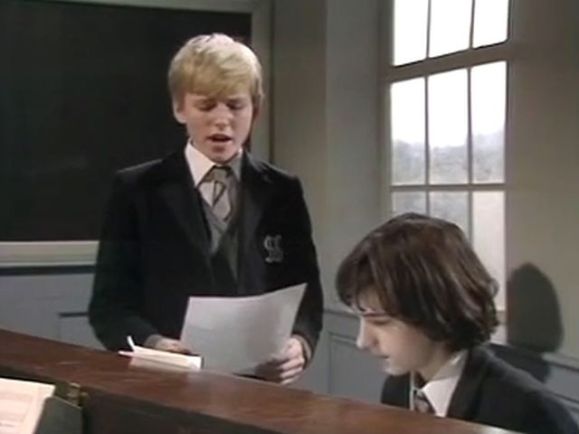 This episode (the twelfth in the series) was the first not to be written by Phil Redmond. It was penned by Alan Janes who’d go on to script another eighteen episodes during the next four years or so.

Whereas series one concentrated on one class, in series two the focus often switches between two different classes and this is the first episode not to feature any of the characters who have until now been the main focus of attention (Tucker, Benny, Trisha, etc). Instead, we concentrate on two new arrivals – Antoni Karamanopolis (Vivian Mann) and Andrew Stanton (Mark Eadie).

Antoni is always falling asleep in class and a concerned Miss Summers (Philomena McDonagh) wants to know why. Since he’s Greek it’s maybe not a surprise (in clichéd television terms anyway) that his family own a restaurant and he’s been helping out several times a week. These late nights are clearly taking their toll, so Miss Summers pays his parents a visit.

Mr Karamanopolis (Alexandros Mylonas) is gloriously unrepentant about working his son so hard, but he quickly sees the error of his ways. Indeed, his change of heart does feel rather too rapid and it’s another indication that the series at this point was more comfortable in telling self-contained stories, episode by episode.

Andrew Stanton and Justin Bennett strike up a friendship, based on their love of music, but it’s hard-going at first since Andrew is constantly angry and upset. Eventually he reveals that he believes his parents are on the verge of splitting up – although by the end of the episode that doesn’t seem to be so.

This was a plot-thread that did have some legs – the Stanton’s marital problems are mentioned again in the third series and by series four Andrew’s father has finally left home (taking his younger sister with him) which drives Andrew to drink (literally – as Tucker and his friends have to try and look after the inebriated boy in a memorable episode).