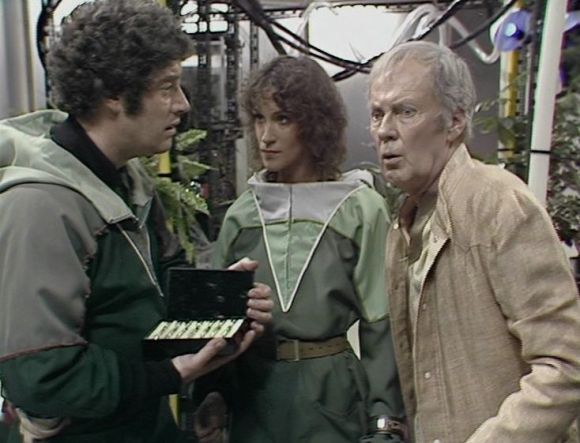 The Liberator is en-route to Aristo, to deliver medical supplies to a seriously ill man called Ensor (Derek Farr).  He isn’t the only sick person though, as Avon, Jenna, Vila and Gan all display signs of radiation poisoning following their time spent on the planet Cephlon.  Since there aren’t any anti-radiation drugs on the Liberator they have to hope that Ensor will be able to help them.  Also travelling to Aristro are Servalan and Travis, who are keen to acquire the mysterious Orac, an invention of Ensor.

Orac was the second episode of a two-part story (a unique occurrence in Blakes 7).  Rather helpfully, for the benefit of anybody who might have missed the previous installment Blake spends the first few minutes recapping the events of Deliverance to Avon (and of course the people watching at home).  This is a rather obvious device (there’s no logical point for Blake to tell Avon what he already knew) but it sort of works.

The lack of anti-radiation gloves (sorry drugs) on the Liberator is hard to swallow.  It’s the most fantastically equipped ship in the galaxy and there’s nothing suitable?  Hmm, okay.  Even odder is that they make no attempt to stop off at any other planet before visiting Ensor, which means they pin all their hopes on the possibility he’ll be able to help them.  Yes, they know that Ensor’s life is at stake, but so are theirs – you’d assume they’d put their own interests first.

Derek Farr was a very familiar face with numerous television and film appearances to his credit.  On television he had decent guest spots in the likes of Bergerac, Rumpole of the Bailey and Some Mother’s Do ‘Ave ‘Em whilst his film credits included The Dam Busters.  He also appeared with Gareth Thomas in Star Maidens, but I doubt that’s a credit either would have put at the top of their cv’s!  He’s rather good as the seemingly cranky and bad-tempered Ensor, who displays a much more human side when he realises that his son is dead.

CALLY: We went to the aid of a spacecraft that had crashed, one of the crew was already dead and the other man was dying, but before he died he asked us to get these to you.
ENSOR: Both men dead, you say?
CALLY: Yes.
ENSOR: One of them was my son.
CALLY: I’m sorry. He tried desperately to reach you. He did everything he possibly could.
ENSOR: Oh, such a waste. He had a good mind. Death is such a waste. You were with my son when he died?
CALLY: Yes.
ENSOR: It’s always too late, isn’t it? I wonder if he knew how much I loved him?
BLAKE: I think he did.
ENSOR: Oh I, I’m sorry if I snapped at you. It’s, it’s just my way. Thank you, for doing all you could to help.

Orac isn’t a story that serves either Servalan or Travis especially well.  Neither are central to the story and the sight of Jacqueline Pearce being mauled by a man in a rubber suit (one of the Phibians) isn’t one of her finest moments, although the concept of Servalan not being in control is an intriguing one.

It’s probably just as well that Greif’s role wasn’t especially large, as an accident meant he was unable to shoot the studio scenes.  A body-double was used and Greif dubbed Travis’ dialogue a few months later (though he was far from impressed with the actor they used, remarking that he had flat feet!)

Blake offers to take Ensor back to the Liberator so he can perform the operation that’ll save his life.  Travis’ arrival forces them to escape via the tunnels and Ensor dies before they reach the surface.  His death is rather perfunctory alas, but it’s necessary in story terms – since it allows Blake to take charge of Orac.

And once Orac is back on the Liberator, everybody is keen to test his limits.  They know it can draw information from any computer without a direct input (not very impressive in the modern internet age, but this was 1978, remember) but what else can it do?  Orac boasts it can effectively see into the future and demonstrates this by showing the apparent destruction of the Liberator ….

Thanks to Terry Nation, the first series of Blakes 7 had a consistent tone, although he would later admit that he found difficulties in finding ideas for some of the later stories in this first run.  So he fell back on some familiar storylines (radiation poisoning, for example) and also had to rely on Chris Boucher to take more of an active scripting role.

From series two onwards, Boucher’s voice in the series would be even stronger and he also bought on board a group of different writers (some better than others) who would take Blakes 7 into various different directions.