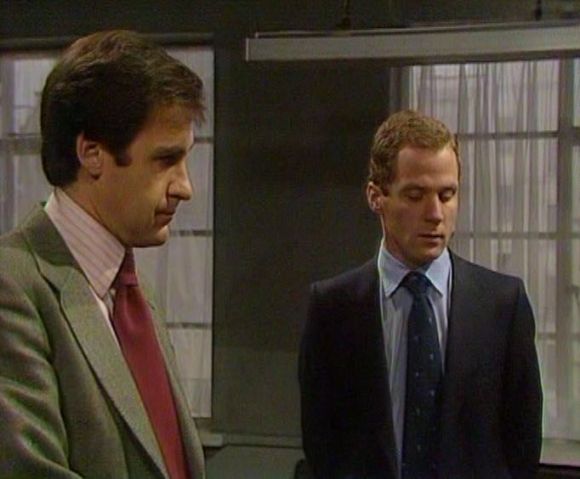 Jeff Ross is convinced that US Senator Franklin Heron was murdered by the FBI.  Heron was an advocate for the freedom of information and Ross believes he was just the latest in a long line of public figures to have been removed by the Bureau (he also mentions JFK and Martin Luther-King).  Burnside doesn’t dismiss his conjecture out of hand, but he does tell him he’s glad it couldn’t happen in the UK.

But when compelling evidence is discovered that suggests a key member of the Cabinet, Stratford-Baker (Tony Church), is a mole for the KGB, Burnside is forced to reconsider his statement.  The evidence he holds isn’t absolute proof (and was obtained illegally by the CIA) so no further action will be taken.  With the possibility that a KGB mole might one day become Prime Minister, is his removal – by whatever means necessary – justifiable?

It Couldn’t Happen Here is a story that seems to act very much as a mouthpiece for Ian Macintosh’s own opinions.  Jeff Ross spends the first five minutes outlining his theories that the FBI killed both John F. Kennedy and Martin Luther-King – mentioning the clear evidence of conspiracies in both cases which were later suppressed.  Later, Wellingham also expresses his conviction that JFK was the victim of a conspiracy.

The notion that JFK murdered as part of a shady conspiracy (involving either the KGB, CIA, FBI, Mafia, Cubans, etc) was widely held for many decades, although in recent years the possibility that Oswald was really working alone has gained more credence (Gerald Posner’s book, Case Closed, for example).  It Couldn’t Happen Here is therefore a reminder of the more paranoid days of the late 1970’s and early 1980’s.  Although since Watergate had happened just a few years earlier, it’s not surprising there was a more jaundiced view of both American politics and the American agencies that were designed to serve both it and the people.

This debate, none too subtly, sets the tone for the remainder of the episode.  Stratford-Baker is by any definition an untrustworthy man – he fled the scene of a car accident in Germany, leaving a woman (one of Burnside’s employees) for dead.  But is he a Russian agent?  He has microdots and secret papers in his house, but it’s not clear proof.  Burnside later agrees with Wellingham that it would be wrong to assassinate him, but his final words to Willie are quite different.  Is he serious when he suggests they should stage a car accident, or is it just idle talk?

Two plotlines run in this one, so whilst Burnside wonders about Stratford-Baker’s loyalties, Willie travels to America to guard Senator O’Shea (Weston Gavin).  O’Shea has taken over Heron’s responsibilities and will therefore be a key target during the time that Willie is assigned to protect him.

This part of the story does rather stretch credibility to breaking point as it’s hard to believe the American government would assign the protection of O’Shea to a foreign operative.  Willie appears to make a hash of it as well – watch the scene when O’Shea leaves the church, following Heron’s funeral.  Willie moves straight to the car, leaving O’Shea completely unprotected and therefore an easy target for a gunman.

O’Shea is killed (although not by the same people who killed Heron – O’Shea’s killer was just a lone nut) and Willie returns home, although it’s tactful that nobody mentions the acres of space he left between himself and O’Shea.

The American sequences (filmed in the UK of course) also show the limitations of the series’ budget.  The funeral of an influential senator like Heron would be a huge affair, with hundreds of people, but The Sandbaggers could only afford a handful of extras – so tight camera angles had to be employed to try and make it look credible.

Elsewhere, Burnside enjoys another meal with Karen Milner and C announces that he’s leaving, effective immediately.  Whilst C might not have been central to many episodes – the main battles tended to be fought between Burnside and Peele – he was always on hand to deliver a pithy assessment of the current situation.  Richard Vernon was a joy to watch in the role and whilst his presence will be missed, it’s a good move series-wise – as it’ll be intriguing to see how the new C works with both Peele and Burnside.