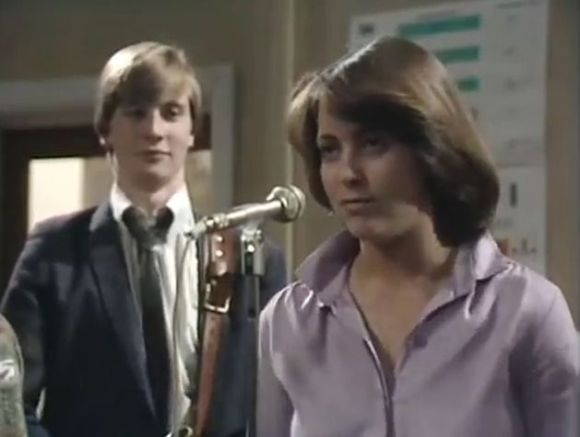 There’s something rather endearing about the low-level villainy of Michael Doyle.  He did issue a few racial taunts to Benny during series one but that was pretty much his worst deed.  Otherwise it’s all pretty low-key stuff – stealing Penny Lewis’ project or, as in this episode, pinching light-bulbs so he can make a small profit by selling them to Junky Meade (Harry Webster).

Doyle doesn’t just take the bulbs though – he leaves a faulty one in its place, which causes no end of confusion for Mr Thompson as he tries to work out exactly why so many light-bulbs are failing.  Timothy Bateson is once again remarkably entertaining as Mr Thompson and what’s even better is that in this episode he has an assistant to vent his frustrations to.  Norman (Leslie Hull) is young and gormless and obviously irritates the older Thompson.  Hull has a nice sense of comic timing and it’s a pity he didn’t return in the future.

There are two other highlights in the episode – the first is Cathy singing Queen Bee.  Originally recorded by Barbra Streisand in 1976, it’s certainly a good showcase for Lyndy Brill’s vocal abilities.  Had this been a few years later then it’s highly likely a tie-in record would have been released (ala the Grange Hill album or, shudder, those EastEnders singles) but there was nothing here, alas.

Perhaps the most eye-opening moment is Mr Hopwood’s confrontation with Alan.  Alan’s smoking habit has been a running theme for a while and when Mr Hopwood catches him, his displeasure is plain to see (he gives Alan a clip on the top of the head, knocking him over).

It’s remarkable that this assault is simply accepted by both parties and not taken any further – particularly since Mr Hicks was dismissed for doing something similar in an earlier episode.  But then Mr Hopwood is positioned as a good and positive character and Alan’s smoking is “wrong” so it’s clear to understand the moral tone that the episode takes.

Even more jaw-dropping is that Alan turns up for school the next day sporting a black eye.  This was given to him by his father after Mr Hopwood told him about his son’s smoking habit.  This isn’t the first time that we’ve seen a pupil physically abused by their parent (Duane was given a black eye in series three after his bike was stolen).

There’s never even a hint that Mr Humphries might have been in the wrong for hitting his child – Alan shouldn’t have been smoking and therefore has been taught a lesson he won’t forget.  It’s a fascinating look at a vanished age.