Skip to content
HomeGideon’s Way – The Rhyme and the Reason

The Rhyme and the Reason opens with Bill Rose (Alan Rothwell) and Winifred Norton (Carol White) enjoying the peace and quiet of a woodland glade.  But this serene scene is soon shattered by the arrival of a motorbike gang led by Rod (Clive Colin Bowler).

Gideon’s Way would sometimes reflect contemporary youth culture, although usually in an unintentionally amusing way.  The bike gang (sneeringly dismissed as Rockers by Bill) are a good case in point.  They don’t really exude an air of menace, although this may be due to viewing the episode in 2015 rather than 1964.  Possibly back then, when motorbike gangs were a hot topic of debate, simply the sight of them would have been sufficient to discomfort a section of the audience.

It quickly becomes clear that Bill, since he’s a Mod, isn’t fond of the bikers, but Winifred feels quite different.  The air of menace and danger she senses about Rod clearly excites her (as does the sound of his engine).  There’s a look of orgasmic pleasure on her face as she drinks in the powerful sound of the bikes – and Bill’s own inadequacy is clearly demonstrated when he fires up his much more modest moped.  Not only does it take several attempts to get going – as Winifred looks on with slight contempt – it also makes a much quieter noise, which obviously isn’t to her taste.

After fifteen minutes it’s still not clear what the crime is going to be – but shortly afterwards the camera tracks over Winifred’s lifeless body and the police investigation can begin.  Bill is the chief suspect – he’d argued with her shortly before her death and his knife is discovered at the scene of the crime.  But he maintains his innocence, and Gideon is inclined to believe him.

There’s no doubt that Carol White will always be best remembered for the role of Cathy Ward in Ken Loach’s groundbreaking Wednesday Play, Cathy Come Home.  The role of Winfield was less demanding but she still gives a vivid performance.  Although she only has a short amount of screen-time, White was able to imbibe the girl with a clear zest for life as well as a definite streak of burgeoning sexuality.  It’s unremarkable now, but as touched upon before, England 1964 was not really swinging – so overt displays of sexual desire were uncommon on mainstream British television.  White later pursued an acting career in America and would die aged just 48 in 1991.

Alan Rothwell has had a lengthy career with spells in several popular soap operas.  He was one of the original cast-members of Coronation Street, playing Ken Barlow’s brother David.  Several decades later he would enjoy a memorable stint on Brookside, although for a generation of children he’s probably best remembered as the host of the ITV Schools programme Picture Box.  And it’s good to know that he’s still going strong today – with recent appearances in The Musketeers, Casualty and Alan Partridge.

He’s perfect as the petulant Bill, who had both the motive and opportunity to kill his girlfriend.  But did he do it?  He maintains that he’s bound to be found guilty because of the way he looks and dresses.  “I’m a Mod, so automatically that makes me into a shiftless, no-good layabout killer.”  It’s interesting that this view is shared by some of Gideon’s team (“his type burns me up” says Keen) and the only policeman who seems convinced of the boy’s innocence is Gideon himself.

As ever, there’s an incredibly strong supporting cast.  Jo Rowbottom plays Bill’s sister Mary whilst the always dependable Duncan Lamont is Divisional Supt. Smedd, the man leading the investigation.  It does seem a little strange that an officer of Smedd’s seniority would be in charge, but then the series often showed the even more senior Gideon meddling in investigations (as he does here) so that’s fair enough.  Edward Evans (who’d previously played Bob Grove in the first British television soap, The Grove Family) has the key role of Winifred’s step-father Fred.

When Keen ventures into a club to talk to Rod, it’s a lovely time capsule of the period – complete with a happening beat-group on the stage and everybody gently twisting in time to the music.  Keen’s later confrontation with Rod outside is another delightful moment – the Rocker finds he’s no match for the wily police officer.

The episode concludes with a lengthy scene featuring Mary being pursued through the streets by the murderer.  It’s a typically well-shot sequence that uses the available locations to their best advantage – the final shot (with Battersea Power Station in the background) is especially striking.

Maybe not the most puzzling whodunnit ever, but The Rhyme and the Reason is a high-quality episode. 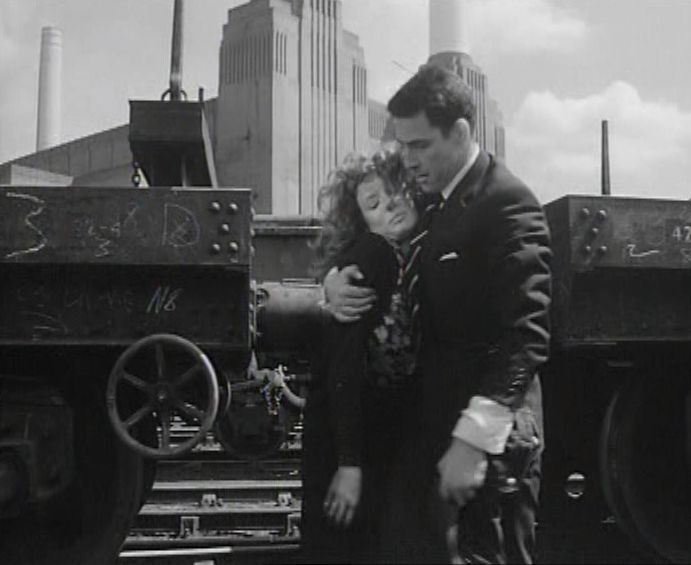 2 thoughts on “Gideon’s Way – The Rhyme and the Reason”