Skip to content
HomePathfinders in Space – Spaceship from Nowhere 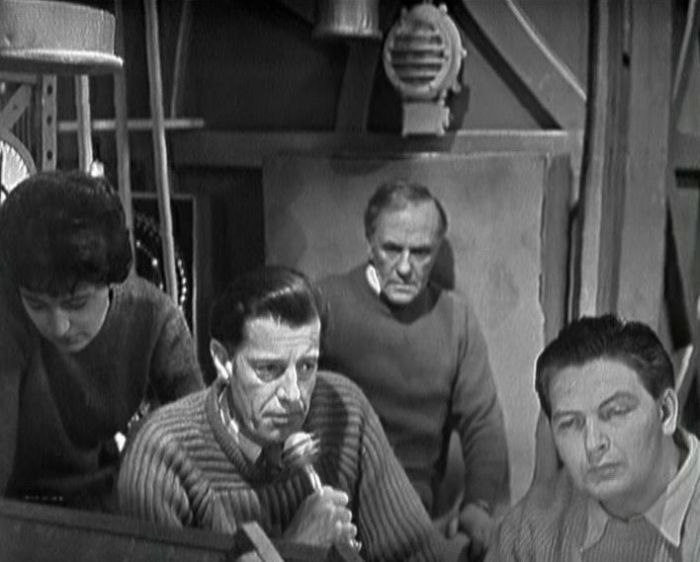 In a highly unsurprising plot-twist, it’s revealed that Valerie has stowed away.  It’s also no surprise that the Professor’s far from impressed to discover that his three children are present with Henderson in the rocket.  He wants them to remain in orbit around the Earth, but Valerie – demonstrating a sly cunning – suggests to both Henderson and her father that it would be safer if they travelled on and orbited around the Moon instead.

A moment which warms the heart occurs when we see news of the Professor’s feat transmitted around the world.  In the UK this is represented by some over-acting extras, but the best is yet to come.  We travel to France (accordion music, a couple of sailors sitting outside a café), Canada (a man fishing in the wilderness with some very obvious cardboard mountains behind him) and Australia (a man in a stable with a piece of straw in his mouth).  It may be a touch stereotypical, but it’s a nice piece of shorthand that shows how, very much like the real Moon landings in 1969, this trip to the Moon was something that the whole world could share.

There’s a rather impressive weightless effect which shows Jimmy floating about.  In the years before CSO, I don’t think this inlay effect would have been that easy to produce (I can’t remember any similar examples in 1960’s Doctor Who, for example).

This episode gives us a chance to get to know the Professor’s crew.  Given the era this was made, it’s a progressive touch that a woman, Mary Meadows (Pamela Barney), is aboard.  And she didn’t have to stow away!  As we’ll see in a minute, Dr. O’Connell (Harold Goldblatt) is currently operating in full Private Frazer mode (he doesn’t go as far as telling them that they’re all doomed, but it’s close).  And for the moment, Ian Murray (Hugh Evans), hasn’t had a great deal to do.

Dr O’Connell’s a worried man.  He’s convinced that disaster awaits them if they attempt to land on the Moon – and he uses force to try to prevent the Professor from doing so.  You’d have assumed that the Professor would have screened his crew beforehand to prevent any such problems, oh well.  Luckily, once they manage to land O’Connell regains his composure and it’s smiles all round again.

I do like the scene where Mary is describing the Moon landscape, prior to the moment when they touch down.  The Moon we see through the viewscope looks pretty much like the real thing, so they clearly must have done some research.  We’ll see next time how accurate the full-size surface looks though …

Whilst the trouble in getting to the Moon has been the main plot-thread so far, the episode closes with an intriguing mystery.  The Professor spots a ship on the other side of the Moon and naturally assumes it’s Henderson.  But it’s not, so where has this unidentified ship come from?