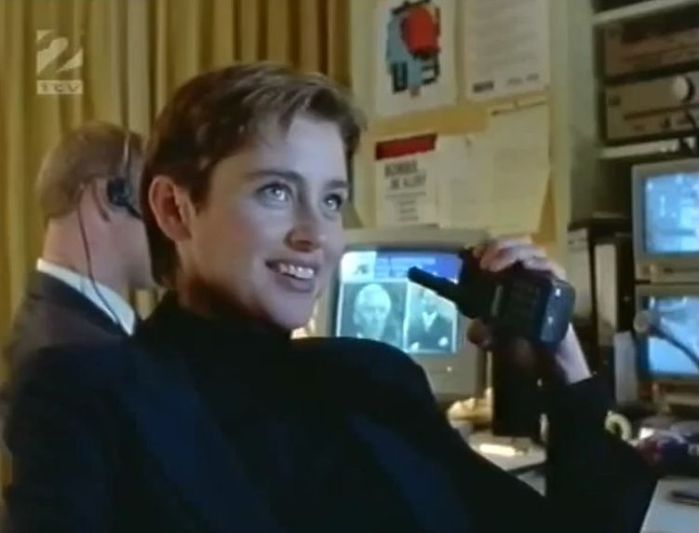 Worrell is designated to be the close protection agent on Robert Connor (William Hope), a right-wing Presidential hopeful.  Liz is put in overall command, which doesn’t please Golding (Aaron Swartz), a particularly aggressive American agent.  He doesn’t seem terribly impressed with the fact that she’s a woman, although the problem may be more that she’s British ….

Familiar tensions between the British and American agents are seen throughout Know Thine Enemy.  The Americans are all aggressive, trigger happy and unwilling to defer to anyone else – all clichés of course, but they help to stoke up the drama.

The way they approach the problem of Michael Aaronson (Peter Marinker) helps to highlight their differing approaches.  Aaronson holds Connor morally responsible (policy wise) for the death of his son and his arrival in Britain sets alarm bells ringing.  The Americans want him picked up and detained but MacIntyre – whilst happy to keep him under twenty-four hour surveillance –  won’t authorise this.

Given that Aaronson has no history of violence – he’s simply a political activist – the way he’s dealt with raises some interesting questions.  If they attempt to prevent his protest (he wants to present Connor with a petition requesting stricter gun control) then Aaronson’s civil liberties have obviously been interfered with – but is this the intention of the American agents?  Or do they truly believe he’s capable of violence?

Either way it’s slightly terrifying how the State apparatus is able to monitor him with ease, which raises the debate (not really touched upon here – the agents have already picked their side) about how far the liberties of the individual should be eroded in the quest to prevent terrorist attacks.

Liz intercepts and searches him and is happy that he presents no violent threat.  She then allows him to take his place outside the Queen Elizabeth Centre, where Connor is speaking, so Aaronson can hand over a petition.  But she doesn’t seem to have mentioned this to Golding and the other American agents, so when they see Aaronson reaching into a bag they naturally react promptly and violently.

You can’t blame them for their actions, which poses the question as to whether Liz deliberately didn’t tell them that Aaronson was present but not armed.  Given the storm of negative newspaper coverage it’s hard to imagine she would have done so, which leave us with the probability that Liz just screwed up.  She does tell MacIntyre that communications were fraught, but you’d have assumed this would have been a fairly vital piece of information to pass on.

Aaronson – hospitalized with a broken arm – isn’t unhappy though, as he’s gained the sort of publicity he previously could only dream of.  This enables him to give Liz a lead on a potentially dangerous threat to Connor.

Throughout the episode we’ve seen a nail-bomb being prepared.  Initially it seemed that Aaronson might be responsible, but after he’s put out of action – and the bomb-making continues – it becomes clear that the threat isn’t coming from him.  As with previous Bodyguards episodes, the hostile party is presented in a rather abstract way (we learn little about them).

Worrell and Liz are split up for most of the episode.  Worrell gets a few lighter moments – mocking Aaronson and the others (Worrell has a decent American accent) – but he’s rather placed into the background here.  Liz, fretting about her first taste of command, has more to do, but Know Thine Enemy never really sparks into life.  It’s decent enough fare, but lacks the personal edge of some of the previous stories.