Skip to content
HomeDoctor Who – The Talons of Weng-Chiang. Part Four 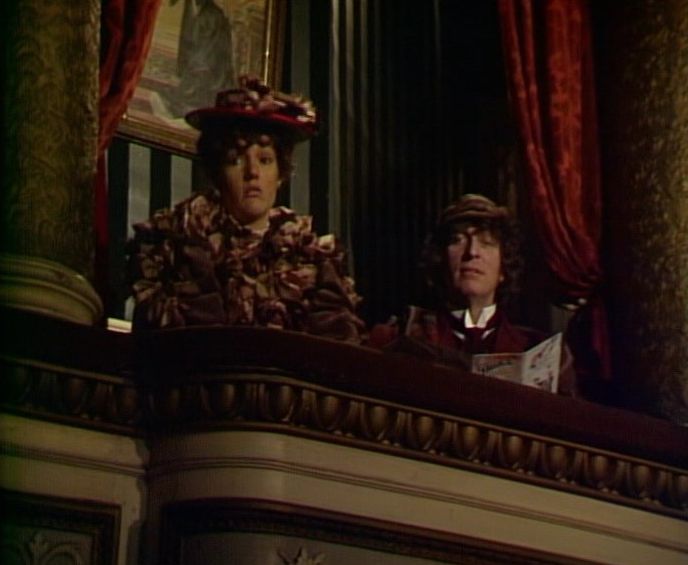 After being largely absent from the previous episode, Henry Gordon Jago comes roaring back in this one.  Once again, Robert Holmes’ skill at creating vivid characters even extends to the ones we never see.  Jago, once more delightfully teamed up with his factotum Casey (dumb and dumber), clearly has little love for his wardrobe mistress.

JAGO: The woman’s a bloodsucker. She’s trying to ruin me.
CASEY: Well she said.
JAGO: Don’t tell me, Casey. I’m an artiste. Every night at this time, I feel like an old warhorse scenting the smoke of the battlefield. As the house fills, the blood starts tingling through my veins. My public is out there waiting for me. I can’t talk about money at a time like this.
CASEY: But you don’t do anything, Mister Jago.
JAGO: I, I announce the acts, I count the tickets, I smile at people. You’ve no idea of the strain it puts on a fellow. Furthermore, she spend seventeen and threepence on the wardrobe last week.

Another lovely scene for Christopher Benjamin and Chris Gannon.

The moment when Jago and Litefoot will meet is coming closer, but for the moment they’re still apart.  The Doctor, having managed to rescue Leela (well, did you really imagine he wouldn’t?) is preparing for a night at the theatre.  Having decided last episode that the best way to locate Greel’s lair would be by the sewers, he’s clearly now knocked this plan on the head.

This is possibly a consequence of the way Robert Holmes had to cobble the scripts together at high speed, but since the Doctor was already aware that Greel’s bolt-hole was somewhere in the theatre, wouldn’t it have been easier just to walk in through the door?  Especially since he knew that large (albeit cuddly) rats were loose in the sewers?  True, he was on hand to rescue Leela, but that wasn’t the intention (just a fortunate coincidence).

Christopher Benjamin sparkles throughout.  His hero-worship of the Doctor, whom he’s convinced is a top private investigator, is delightful.  A decade or so later Holmes would recreate the character in The Two Doctors, as what is Oscar, if not a Jago clone?

One of my favourite Jago moments occurs when he pays a surreptitious visit to the Doctor and Leela’s box.  As an aside, did the Doctor pay for this first-class treatment, did Jago lay it on or did the Doctor just breeze in?  Anyway, Jago crawls into the box on his hands and knees, proud to be standing by the Doctor during his hour of need.  Alas, his pride gets a bit wobbly once the Doctor informs him that he’s quite alone and the theatre isn’t surrounded by a ring of policemen.  Jago’s plaintive “oh corks” as he shuffles out is wonderful.

It’s easy to see how The Good Old Days influenced this part of the story (a reference which wouldn’t have been lost on the contemporary audience and – thanks to the recent repeats – possibly not on a section of today’s viewership).

With Greel having tired of Chang’s bungling, Chang is now on his own.  Some might have attempted to flee, but he carries on his twice-nightly magic act.  What a trouper.  It’s a fascinating touch that Greel doesn’t kill him – instead he sabotages his act (something which no doubt would have hurt him more).

John Bennett’s been excellent throughout, but never better than when a defeated Chang tells the Doctor about how he, just a humble peasant to begin with, helped Greel.  Unless Greel was a student of Chinese folklore (slightly difficult to believe, but not impossible) then possibly Chang was the one who dubbed him Weng-Chiang.  But however it came about, Chang on one level does seem to believe that Greel is a reincarnation of his god.

With Chang defeated, it looks as if the story is coming to an end – but Holmes still has two episodes to fill so from the next episode he’ll spin events off into a different direction ….