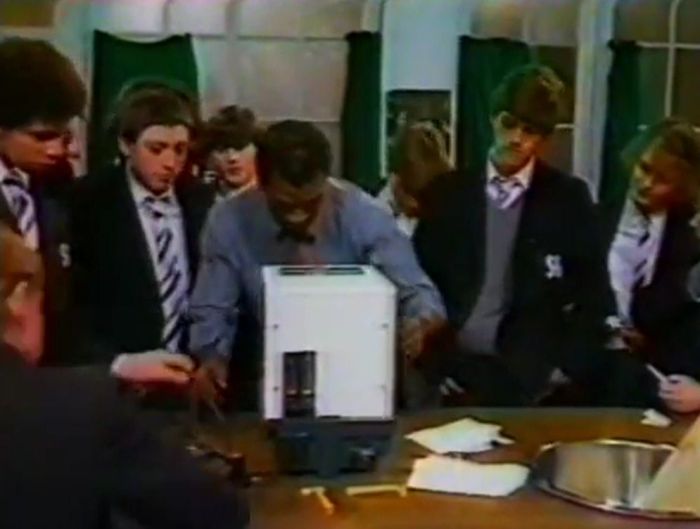 Zammo’s descent into heroin addiction would become the defining theme of series nine (and possibly of the entire thirty one year run).  But dramatically there’s a few missed opportunities along the way.  It’s very noticeable that we never see the reaction of key characters – especially Jackie – when they learn the news for the first time.  Roland’s chosen to be the one who discovers his secret, but again there’s no scene where he discusses this news with the others.

You’d also have expected that his increasingly erratic behaviour would have been commented on by his classmates but after the next episode we aren’t really privy again to many classroom scenes with the fifth formers.  Possibly this was an intentional move though – from now on Zammo’s an isolated character and rarely interacts with his former friends.

Although it’s still early days with this plotline there’s clearly something up with Zammo.  He’s short of money (already in debt to Kevin) and attempts to cheat in the great moustache weighing competition.  Mr Kennedy – aware that Banksie is feeling self-conscious about his moustache – offers to shave off his own facial hair as well.  Banksie’s will be weighed and the class will then be able to use that figure as a control in order to estimate the weight of Mr Kennedy’s moustache.  There’s a twenty five pence entry fee and if anybody guesses the weight correctly they win six pounds, if not the money goes towards the school fund.

It’s an interesting wrinkle that Banksie is the one who discovers Zammo’s cheating ways.  He manages to ensure that Zammo doesn’t profit, but he also doesn’t reveal Zammo’s secret to the others.  Was this because he intended to hold this piece of information back, all the better for using it to manipulate and embarrass Zammo at a later date, or has Banksie turned over something of a new leaf?  He does later tell Mr Kennedy that it’s better that the money goes towards the school, although given that we’d only recently seen him and Trevor attempting to cheat at one of the games during the Christmas Special, this holier-than-thou attitude is slightly hard to swallow.

Mr Kennedy’s affability and ability to connect with the pupils is clearly demonstrated here.  He’s an inspirational teacher and therefore couldn’t be further removed from the bitter and twisted Mr Bronson.  There’s a lengthy staff-room scene at the start of this episode in which Mr Bronson, quietly spitting venom, caustically comments on Mrs McClusky’s choice for acting deputy head.  Mr Baxter? A sports teacher? It’s obvious that he saw himself in the role (or more possibly as the head itself) but instead has to sit on the sidelines, quietly fuming.

As for Mr Baxter himself, he’s the recipient of a fine scene where he firstly berates the second years for their poor quality gym kits and then conscripts the unwilling Gonch, Hollo and Robbie into the newly reformed Grange Hill swimming team.  As ever, Michael Cronin is a joy.

1986 was the last hurrah for the old Grange Hill school.  Shortly to be closed for good following an asbestos scare, it’s in a remarkably run down and dingy state.  This ties into the conversation between Mr Kennedy and the fifth formers (who bemoan the fact that it’s impossible to do projects since the school library has so few books – hence their small fund-raising effort).  The way that Grange Hill has always struggled with funding has been a subtle running theme for a number of years and given the turmoil in the real world during the mid eighties (teacher strikes were at their height) it’s not surprising that it’s touched upon again here.

My recollection is that although it was stated that a character would become addicted to heroin, their identity wasn’t known, meaning that that Danny Kendal seemed to be the obvious choice.  Despite his diminutive size he was unafraid to take anybody on (older pupils, teachers) and there’s further early evidence of his erratic behaviour here as he runs amok with a wrench.  But it would have been obvious – too obvious no doubt – to make him the one and the dramatic potential of turning a previously likeable character like Zammo around was clearly too tempting to avoid.

Imelda’s reign of terror continues.  This week it’s shoving fibreglass down the backs of unfortunate first years.  Everybody around at the time – including Gonch, Hollo and Robbie – find this to be a huge joke, although they aren’t present when the painful lacerations are revealed.  This allows us to understand that they maybe weren’t as heartless as they first appeared, although Calley and Ronnie have sharply differing opinions about Imelda’s part in this.  Calley believes that Imelda also couldn’t have known what damage it causes whilst Ronnie isn’t so sure.  Next time we’ll discover the answer to this question.