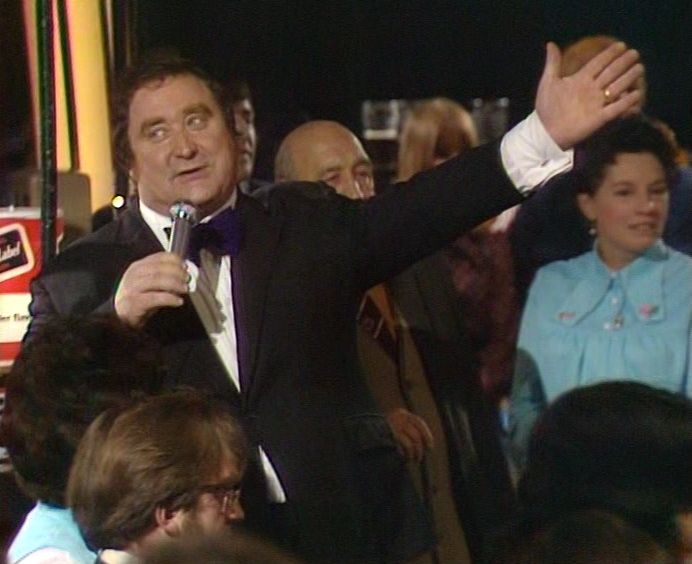 Bernard Manning’s introductions are almost always interesting. Sometimes he’s genuinely enthused about the acts whilst on other occasions he indulges in some good natured (?) banter and insults. Then there are the times when he bigs up a turn that would later sink without trace. How do today’s openers, The Vernons, fare? “Ladies and gentlemen, greet The Vernons”. Hmm, he didn’t put a lot of effort into that ….

The Vernons are an archetypical Wheeltappers opening act. Three attractive young ladies squeezed into tight purple outfits (to prove this point they make sure to turn around and wiggle their bottoms) the trio rather pleasingly belt out Automatically Sunshine in a little over two minutes. Short but sweet.

A comedian often filled the second spot of the evening and today it’s Ray Fell. He’s sporting a very impressive shirt and bowtie – better material than his gags anyway (I thank you).  For the second part of his spot he invites a pianist called Sydney onto stage. Sydney is just a little bit camp (I think it was the mincing walk and handbag that gave it away).  Their banter is very much of its time although the moments when both struggle to keep a straight face do raise the odd smile.

Elaine Delmar – still going strong today – takes no prisoners when tackling You Are The Sunshine Of My Life. Given that she – like all the turns – has to perform in a fug of cigarette smoke this is no mean feat.

He’s not yet topping the bill, but ‘unusalist’ Paul Daniels is still given a decent ten minute spot. Like his previous Wheeltappers appearance, Daniels displays his sharp and spiky club persona (honed after countless years trudging up and down the country in similar venues to this one).  Easily able to deal with the odd heckler, Daniels shuffles some cards, rips up a five pound note (causing the audience member who donated it to suffer a mild spasm) and does the cup and ball routine as entertainingly as ever.

I love the moment when Paul aims a dig at Bernard’s Embassy Club. We cut to a shot of Bernard with a rather forced smile on his face ….

Alvin Stardust is today’s top of the bill. Wearing a checked jumpsuit he certainly doesn’t hold back – kicking off with My Coo Ca Choo and Jealous Mind, Mr Stardust is a bundle of energy. Born Bernard Jewry in 1942, he’d already enjoyed some success during the 1960’s as Shane Fenton and whilst his 1970’s hit-making wouldn’t last long, he bounced back again in the early eighties (most notably with Pretend in 1981).

He’s certainly a wow with the ladies here – who want to divest him of his gloves (and possibly more). One chases him backstage (possibly staged, but maybe not) before he closes the show with Money Honey which certainly seems to leave the Wheeltappers faithful more than satisfied. 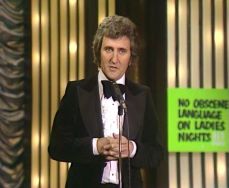 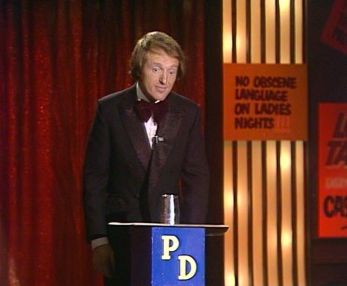