The fifth formers are off to the Isle of Wight, although Trev’s trip gets off to a bad start after Mr Mackenzie discovers his not so secret stash of beer. Initially I thought Trev was being cunning by hiding it in Vince’s bag, but it seems that their labels were just mixed up. Which leaves Vince shouldering the blame and Trev wondering where the next off licence might be ….

Mandy arrives without her glasses (she’s trying out a pair of contact lenses). Gonch, who’s been interested in her anyway, perks up even more at this new, improved model. Quite what message this gives out to spectacle wearers I’m not sure, but it’s not really a positive one.

After learning that it’s Mandy’s birthday tomorrow, Gonch is desperate to buy her a present. He has a brief window of opportunity – ten minutes – before the ferry departs, so nips off rather smartish to the shops.  He doesn’t make it back in time though and so the ferry sails without him.

Odd that he didn’t think that the ferry (or indeed the island) might have a suitable present. There’s no real damage done though as Gonch – ever resourceful – simply hops onto the next catamaran and then takes a taxi to the outdoor centre. Mr Mackenzie, left behind to locate the missing boy, is far less impressed with Gonch’s antics.

If Gonch and Mandy are drawing ever closer, then Calley and Robbie seem to be somewhat fracturing. His attempt to place a friendly hand on her leg meets with icy disapproval (Robbie, of course, reacts in the only way he knows how – he gets angry).  I can’t really blame Calley, I think she’d be well shot of him.

Ronnie now goes into extra catty mode whenever Gonch and Mandy appear whilst the fine Isle of Wight air seems to have done Mr Bronson the world of good. He’s very avuncular, particularly with Joan Hamilton (Rita Davies), the head of the outdoor centre. Indeed he’s so smitten that he even elects to take a dip with her in what clearly is a rather chilly swimming pool. Love knows no greater sacrifice than that.

There’s another school party nearby and it doesn’t take Calley and the other girls long before they’ve got very pally with the boys. Can you guess how Robbie reacts to this? Yes, he’s pretty much apoplectic. Some geezer trying to steal his bird? They’re taking real liberties.

I like the way Trev keeps buying beer and Vince keeps throwing it away. Especially when Vince starts to mess with Trev’s mind by telling him that he must have drunk it all and then forgotten! Poor old Trev’s so addled at this point that he might even begin to believe it.

Another of those mysteries which never really was a mystery is solved. Trev was the one sending Georgina notes, so she decides to take offensive action – giving him a good kicking. Presumably she’s picked up some decent tips from the self awareness class. 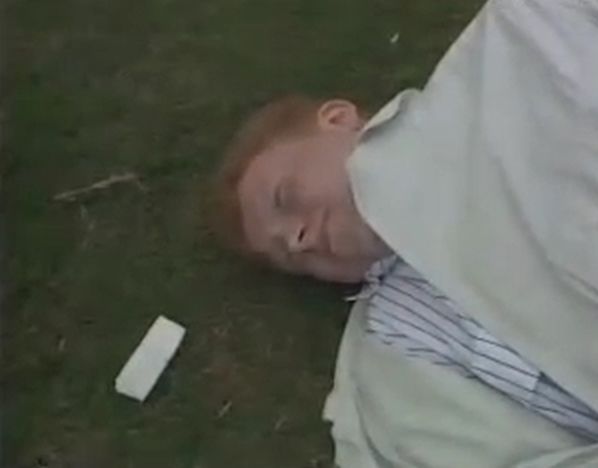