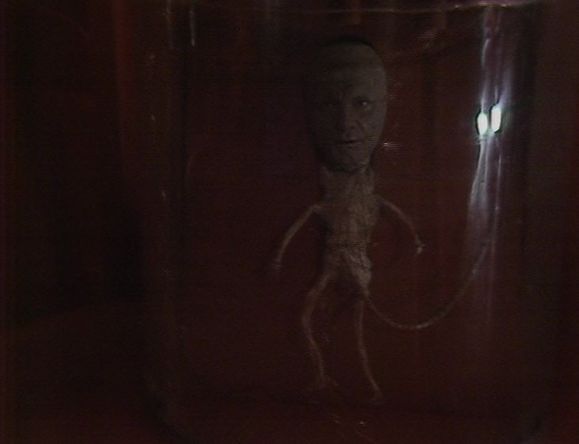 Cally, under the control of a mysterious alien, pilots the Liberator to a distant planet where it becomes ensnared in a strange web.  Blake teleports down to the surface, finds more of the web-like substance and meets Geela (Ania Marson) and Novara (Miles Fothergill).  They are under attack from a group of diminutive aliens called the Decimas (as is Blake when he arrives).  But as Blake begins to assess his surroundings, he finds that his sympathies lie more with the Decimas than the distinctly odd Geela and Novara.

Exactly why the two humanoids are on the planet, their relationship with the Decimas, and the involvement of the mysterious Saymon (Richard Beale) are all puzzles that Blake finds he has to solve.

The Web is a story that seems rather out of place in series one (although you could imagine it fitting into series three or four quite easily).  But on the other hand, since the majority of the first series from now on will be dominated by Servalan and Travis, it’s probably not a bad idea to have a couple of non-Federation/pure SF stories.

True, it’s not one to watch in the company of non-fans, as there are various production choices (the Decimas, Saymon, etc) which will no doubt only generate derision.  But digging deeper underneath, there’s a creepy SF story here – which makes a nice change from the Blake versus the Federation yarns.

Cally’s only been onboard the Liberator for a short while and she’s already taken over by a mysterious alien force (this certainly won’t be the last time it’ll happen either).  As previously discussed, it’s easy to spot various plot contrivances that have been put into place in order to shape the drama and Cally’s possession is another.  In Doctor Who, the TARDIS could simply land at random on a planet and then the adventure would begin.  This can’t happen in Blakes 7, so another way had to be found to involve Blake and the others in Saymon’s affairs.

Michael E. Briant’s direction is very effective – the story opens with a nice panning shot of Saymon’s laboratory and the film sequences (recorded at Black Park) have a spooky atmosphere.  Miles Fothergill had previously played the emotionless robot SV7 in the Doctor Who story The Robots of Death, which was clearly good practice for his similar role here.

The dubious morality of genetic engineering is debated and it’s pleasing that there’s no pat, neat solution at the end.  Blake sides with the Decimas, but not everyone share his sympathies.  “These are what you wanted to protect” comments Avon, with Blake retorting that the Decimas are fighting for their lives.  “Who isn’t” counters Avon.

The early part of the story takes place on the Liberator, which allows everybody to enjoy some more character development.  It then becomes more of Blake’s story as he meets Geela, Novara and Saymon.

Highlights of the first part of the episode include the controlled Cally knocking Vila out, which happens just after he asks her what she thinks of his new outfit.  My opinion?  Not very good.  Also of note is the scene between Cally and Avon.  She’s still under the control of Saymon at the time (although Avon doesn’t realise this until later) and there’s an intimacy to her words which clearly rattles the cold, logical Avon.  It’s one of the few times thus far that we’ve seen him wrong-footed, so it’s a nice character moment.  Jenna’s possessed acting is also interesting, shall we say …..

The Web probably isn’t a particularly highly regarded episode, but it’s certainly not without merit and is a step-up from the tedious run-around antics of Time Squad.