Following Gareth Thomas’ departure, Paul Darrow moved centre-stage and it’s easy to see how Aftermath was crafted to facilitate this transition.  In one way this was something of a risk – Avon (and Darrow) had worked so well during the first two series by operating as an outsider – someone who sat on the sidelines, caustically criticising Blake’s plans.  Therefore the series format had to be somewhat re-tooled (Avon’s dislike of Blake’s freedom-fighter heroics was so strong that it would have been implausible for him to simply pick up where Roj left off).

Instead we see the Federation retreat into the distance, at least for now.  Following the galactic war they’re no longer the dominant force they were (we’re told that 80% of the Federation fleet has been destroyed).  The war between humanity and the aliens is played out during the first few minutes of Aftermath in the most cut-price way imaginable – numerous model shots are reused from previous episodes in order to give the impression of a vast galactic battle.  It’s not terribly convincing, it must be said.

The Liberator has suffered severe damage, which means the crew have to head for the life capsules.  Avon says that Blake and Jenna have gone off together – whilst this may have been a script necessity to cover for the absence of Gareth Thomas and Sally Knyvette it does also make sense (since Jenna harboured a long, if subtle, pash for Blake).

I’ve never quite understood why Avon and Orac end up on the planet Sarran whilst Vila and Cally’s planetfall is somewhere else entirely – they all left at pretty much the same time so you’d have assumed they’d have ended up together.  The reason in script terms is obvious though – Keating and Chappell are written out of this one so that Darrow can establish his credentials as the new leader (similar to how The Way Back focused on Blake).

It’s a Terry Nation script, so it should come as no surprise that Sarron has its share of murderous primitives.  They’re led by Chel (Alan Lake) who observes the battle raging above the planet’s atmosphere.  “This is the day that was prophesied. The day our law foretold. They will come from the sky to destroy us. They will burn the stars to light their way. We must be prepared.”  Lake was never the most subtle of actors, but Chel isn’t a role that demands method acting so that’s fair enough.

Two hapless Federation troopers (played by Richard Franklin and Michael Melia) fall victim to Chel and his men but Avon is luckier as he’s rescued by Dayna (Josette Simon).  Following Sally Knyvette’s departure there was a vacancy for a new crew-member aboard the Liberator and Dayna certainly fits the bill.  The casting of a young, black actress would have been quite noteworthy at the time (1980) and Simon, despite her lack of experience, hits the ground running.  Although the question is, can Dayna’s character be maintained over the remainder of the series?  Jenna had been introduced as a hard-bitten smuggler but eventually found herself as little more than the Liberator’s teleport operator.  Dayna does turn out to be a little luckier, but Blakes 7 remains very much a boys show and the female characters tend, too often, to play second fiddle.

Still, Dayna has a good chunk of screen-time in this episode.  Her initial meeting with Avon is a memorable one – she kisses him on the lips, telling him that she was curious.  Avon, as befits his new status as a dashing action hero has an immediate response. “I’m all in favor of healthy curiosity. I hope yours isn’t satisfied too easily. I think you’ve cured my headache.”  The arrival of Servalan shakes things up.  Pearce and Simon share a lovely two-handed scene, which sees Servalan dripping with fake sincerity and Dayna barely able to hide her loathing.

Dayna is presented as something of a flawed character – the life she’s led to date (an isolated one with her father) has left her with little understanding of other people.  She regards the Sarrans as animals, who exist to be killed as and when she decides.  Her potential awkwardness with others was something that could have been developed, but never really was.

A major change in series three concerns the relationship between Avon and Servalan. Let’s be honest, during the first two series they never had a relationship at all (try counting the number of lines they exchanged during the first twenty six episodes). All that changes now as we see that love/hate is in the air.  Servalan tells Avon that Star One is destroyed, which means that the Federation has been crippled.

AVON: So Blake’s rabble finally get freedom of choice. He won after all.
SERVALAN: Forget Blake. You have control of the Liberator now. There’s no more powerful ship in the galaxy. You have Orac. Avon! Don’t you see what that means?
AVON: You tell me about it.
SERVALAN: You could rebuild it all. All those worlds could be yours, Avon, they’re there for the taking. You and I could build an empire greater and more powerful than the Federation ever was or ever could have been. Now, Avon. At this moment we can take history and shape it in our own image. Think of it: absolute power. There is nothing you can imagine that we couldn’t do.
AVON: I am thinking of it.
SERVALAN: We can do it, Avon.
AVON: I know we can.
SERVALAN: We’ll be answerable to no one. Ours will be the only voice. Imagination our only limit. [They kiss. Avon grabs her by the throat and pushes her to the ground]
AVON: Imagination my only limit? I’d be dead in a week.

There’s no doubt that Avon and Servalan’s kiss (and his manhandling of her) launched a thousand fan-fics.  Darrow and Pearce are electrifying in this scene and it’s worth the price of admission alone.

The death of Dayna’s father, Hal Mellanby (Cy Grant) and her adopted sister Lauren (Sally Harrison) means that she no longer has any ties to the planet and is free to join the Liberator.  And the fact that Servalan killed her father will provide the series with some nice scenes of dramatic tension whenever the two meet again.

Although the primitives sub-plot of Aftermath is fairly tedious it doesn’t really impact on the main thrust of the story, which revolves around the Avon/Dayna/Servalan triangle.  All of them, especially Darrow, benefit from generous amounts of character development.

Unusually, we end on a cliffhanger.  Avon and Dayna return to the Liberator but find themselves on the wrong end of a Federation gun.  The curly-haired officer asks them why they’ve boarded a Federation ship …… 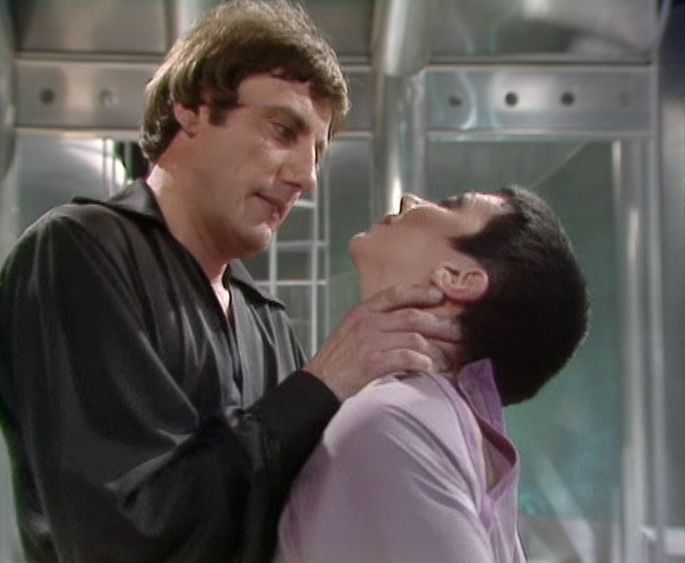