Lee Kingley (Lennie James) finds himself sentenced to a lengthy stretch at HMP Mandrake. Despite his lack of prison experience he seems well equipped to survive its dog eat dog world, but he’ll need to watch his back ….

Broadcast on Channel 4 in early 2003, Buried garnered considerable critical acclaim during its short run (only eight episodes were made) but this didn’t translate into decent viewing figures (it averaged around one million per episode). This seemed to be the reason why a second series wasn’t commissioned, despite the fact that it won the BAFTA for Best Drama Series in 2004.

From the same stable as The Cops (BBC2, 1998 – 2001), Buried had a similar bleak, unsentimental tone allied to a realist style. It was produced by World Productions, a company who had made this style of drama their trademark during the 1990’s and 2000’s (Between the Lines and Cardiac Arrest, for example).

Following his television debut in 1988, Lennie James began to notch up an impressive list of credits during the next decade. He was part of the short-lived but memorable BBC1 police series Out of the Blue (1995/96) whilst prior to Buried he’d begun to make regular cinema appearances (Snatch, Twenty Four Hour Party People). America would then beckon (though we shouldn’t blame him for appearing in the forgettable remake of The Prisoner). More recently, he’s been a semi-regular on The Waking Dead.

Although Lee’s sentence is for GBH and firearms offences, the opening of the first episode floats the notion that he’s been the victim of a miscarriage of justice (he’s waiting to hear about his appeal). Lee’s older brother, Troy (Dave Fishley), is the real criminal of the family and he suggests that Lee’s been targeted in order to get at him. The truth is rather more prosiac though.

There are some questions you don’t ask in prison – the reason why someone’s inside being the main one (Lee, by making this faux paus, betrays his inexperience). As a new face he finds himself being sized up by the old hands – some are clearly dangerous whilst others seem friendlier. This mix of characters (on both sides of the fence) is one of Buried’s main strengths.

Teased out during the series is the uneasy relationship which exists between the immates and the prison officers. Detente is generally maintained (in some ways it’s not dissimilar to Porridge – do your time, keep your nose clean and you’ll be alright) with an ironic tolerance often shown from both sides. Some people, like psychiatrist Dr Nick Vaughan (Stephen Walters), are keen to try and dig a little deeper, but Lee – for one – keeps his distance.

Although he settles into prison life quite easily to begin with, towards the end of the first episode we begin to see that Mandrake is a place where violence and physical abuse between inmates is shrugged off as a regular occurrence. The sadistic Ronaldo (Francis McGee) is knifed during an argument in the showers and Lee not only shields the perpetrator (a rather pathetic, drug-addled type) but also claims responsibility for the assault. There is method in this seeming madness though – the more vicious you are, the greater respect you earn. And with Lee having already upset some of his fellow inmates, it does no harm to have his legend bulked up a little ….

Possibly the most intriguing instalment sees Troy moved into the same cell as his younger brother. It does seem odd that Troy would be transferred to Lee’s prison, but whatever the reason for the move, the simmering tension which exists between the pair is deftly drawn out.

Putting the brothers together makes sense from an official viewpoint – it’s hoped that Lee will prove to be a stabilising influence on the uncontrollable Troy – but Lee begins to suspect that there’s another reason. He’s convinced that their cell has been bugged (another character later comments on the corrosive nature of prison – how it’s a breeding ground for all kinds of paranoia).

Troy’s new found fascination with religion (he takes on the mantle of Jesus Christ) is another manifestation of this. He’s clearly a man on the verge of a nervous breakdown, but his ultimate fate causes Lee to despise the system even more. Whilst Troy’s abdication means that a new King – Lee – is crowned in his absence ….

Lee may now be a well-respected man but his increasing loss of personal control is a feature of episode four. This happens after one of his trusted sidemen – Kappa (James Wells) – is accused of being a paedophile. The truth of the matter is never settled, since the “evidence” (Kappa is alleged to have a picture of Lee’s young daughter stashed away) is suspect to say the least. But Lee – who’s already had to face the news that his wife has left him – isn’t thinking clearly and attacks Kappa in a bloody frenzy.

The latter part of the series continues to explore various familiar themes. Drugs remain an ever-present problem, with Nick placed under pressure due to the fact that the inmates in his secure unit – who are supposed to be clean – keep failing their drug tests. Can he find out who the supplier is? For a man who likes to believe he has the trust of the prisoners this means treading a very fine line.

Nick also has a prominent role to play in the sixth episode. Female officer DD Burridge (Jane Hazelgrove) is assaulted by a prisoner. She’s later forced to speak to Nick about her experience, but it’s hardly surprising that she’s somewhat hostile towards him (“I’m the victim, but I’m the one who’s being punished” she tells him). Hazelgrove, having skirted around the perimeters of several previous episodes, moves more into the forefront here and is very good value.

Although Buried could have gone to a second series, there’s something pleasingly circular about the final scene of the concluding episode (Lee – now an old hand – gently tells a new arrival that you should never ask anybody what they’re inside for). His journey – from an innocent new arrival to a hardened old lag – is now complete.

Buried is something of a hidden gem. The harsh tone and generally unlikeable characters might have been the reason why it didn’t capture a larger audience but fifteen years on it’s aged very well. A series which doesn’t pull its punches, Buried is an absorbing watch and comes warmly recommended. 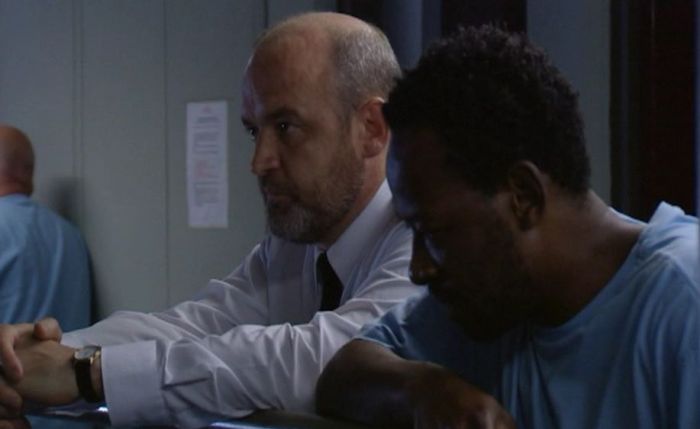