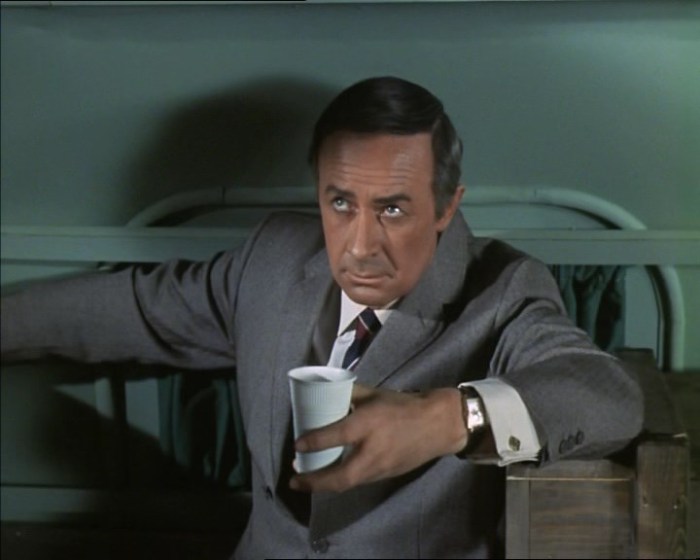 A cache of Japanese weapons from WW2 are discovered in a Burmese jungle. They’re intercepted by a group of gun-runners who plan to sell them to international arms dealer Hartington (William Franklin). The Champions follow a winding trail which eventually leads them to Africa ….

Sharron (“Intelligent, beautiful”) is the star of this week’s post credits superpowers demonstration. Dressed to kill after a night on the tiles, she moves a car for a couple of drunk chaps. The fact she’s alone hints at her independent nature (although when she turns up at Nemesis HQ, Craig can’t resist leering in her direction).

Our three heroes head out to Burma. Sharron and Richard keep tabs on Hartington, who has a meeting with Nadkarni (a delightfully sweaty Wolfe Morris).  I do rather like Richard’s disguise (a pair of dark glasses) which is nicely inconspicuous when you’re sitting in a restaurant.

Meanwhile Craig talks to the police captain in charge of the case (a slightly hysterical Ric Young). These scenes chug along with a fairly low level of excitement, although William Franklin and David Lodge (as Hartington’s number two, Filmer) are always watchable, if rather underused.

Half way through the story I was still waiting for it to click into gear. More good actors (Guy Deghy, Paul Stassino) pop up, but the plot seems rather small beer.  Surely there must be arms shipments happening all the time, why is this one so special?

So you have to take your entertainment where you can – such as a few nice comic moments for William Gaunt or a highly unconvincing shot of Stuart Damon matted into some Burmese street footage. Things start to pick up when Craig meets Hartington – Craig getting squashed by a packing case directed at him by Filmer is nicely done (as is his athletic escape from the warehouse cellar).

If the audience might possibly be suffering from a faint case of boredom as the episode wears on, then this seems to be mirrored by the Champions (who are now back at Nemesis HQ). When the most exciting thing to happen for a while is the way they all manage to throw their Styrofoam cups into the waste paper bin, you know you’re in trouble ….

Thankfully things are slightly more energised once they head out to Africa. We may be back in the teeny-tiny studio jungle set, but there are compensations – such as a chimpanzee waking across shot or Sharron’s rather attractive jungle-wear.  I’ll dock them a point for another less than impressive matte shot though – those giraffes seem to be wobbling about a bit.

Hartington and his associates have also travelled to Africa but are less fortunate. Their plane crashes, although luckily the weapons are safe (as is Hartington). Mind you it’s impossible not to raise an eyebrow at his massive head bandage which looks rather silly.

Overall this is a fairly undistinguished effort from Dennis Spooner and is worth only a middling two and a half out of five. 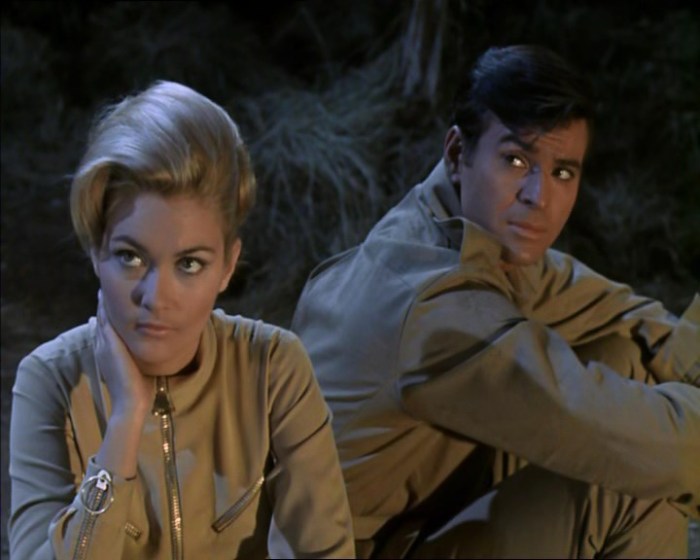