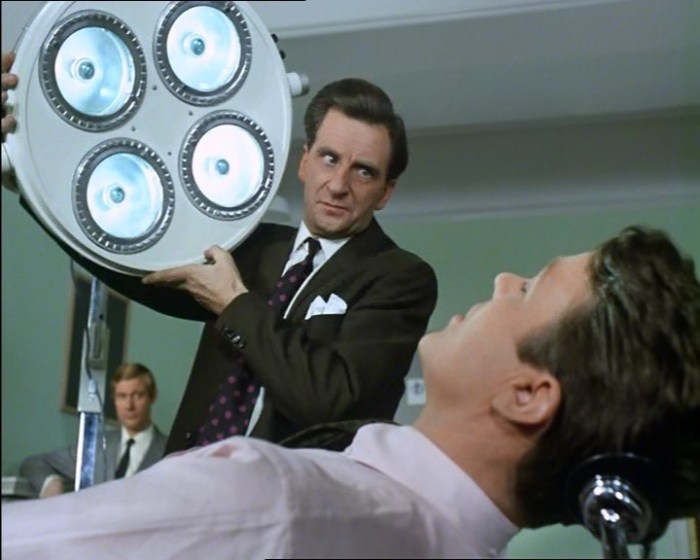 After a visit to the dentist, Lord Mauncey (David Langton) almost steals a file containing vital defence secrets from a secure Goverment facility. Although unsuccessful, the attempt raises several immediate concerns – such as why the previously upright Mauncey did something so out of character as well as the need for added security.

Major Duncan (William Squire), head of M7, enlists the Champions – asking them to steal the file, thereby proving that the current defence procedures are inadequate. Richard doesn’t take it out of the building, instead he memorises its contents. This then makes him a target ….

As so often, the ultra secret defence establishment we see today is hidden inside an apparently innocuous building – in this case a clothing store (Mauncey gains admittance by purchasing the correct tie!). Luckily, security is more watertight after that – he has to input a complex code on a keypad and then plays a nifty little tune on a keyboard before finally gaining access to the vault.

All of this, plus the fact that after he’s got the file in his hands the shutters come down and he’s gassed, do suggest that security’s fine as it is. But had that been so then we wouldn’t have had much of a story.

Post credits, Craig is a togged up as a cowboy and demonstrates his sharp-shooting skills. He of course comes out on top and can’t help but display a certain air of smugness.

William Squire would later have a lengthy stint in security (as the fourth ‘Hunter’ in Callan).  Duncan is therefore good training for him (the offhand way he says that Mauncey is undergoing interrogation and eventually will tell them the truth hints at the ruthless way the Section also operates).

Given that Mauncey was one of a select group of people to have the correct security clearance to enable him to access the file, asking the Champions – who don’t have this knowledge – to break in does seem slightly pointless. While Richard and Craig glumly discuss how they’re going to break the bank (neither are keen on the job) Sharron nips off to speak to Mauncey. He seems rather taken with her (no doubt the fact that she possesses a very pretty face is the reason why she was chosen for this mission).

Security at M7 doesn’t seem to be that good – considering that Mauncey is later murdered in his cell. Perhaps Duncan needs to stop worrying about the security of his top files and instead concentrate on a root and branch review of the entire department ….

The boys toss a coin to decide who will break into the vault (Richard loses and has to do the job). Sharron is excluded from this, much to her disgust, but you can sort of understand why – given that the ‘password’ involves purchasing a tie.  The break-in scene is a fairly tense one, although it can’t help but feel slightly like padding – now it’s been established that someone is keen to get their hands on these secrets, the story won’t advance until we meet them.

Richard is lifted immediately after leaving the vault. How did the black hats know where he was and what he was doing? Given that we’ve only met one member of M7, this particular mystery doesn’t seem that taxing (Nutcracker is a spy story told in a very linear way).

Right from the pre-credits, it looks obvious that the dentist – Warre (John Franklyn Robbins) – is decidedly dodgy, and although this isn’t confirmed until the close of the story, the reveal therefore won’t come as a surprise.  Warre’s brain-washing techniques are a story element that wouldn’t have seemed out of place in The Avengers.

It’s always nice to see David Langton and William Squire, but both are slightly underused. Nutcracker has all the elements for a top episode but something doesn’t quite click for me – a touch more mystery and a few red herrings might have helped.  The climatic fight is also something of a damp squib as it’s over almost as soon as it begins. And the fact we don’t have a tag scene means that the episode ends rather abruptly after this brief punch-up.

Having said all that though, Nutcracker moves at a decent pace throughout so I’m happy to give it a score of three and a half out of five.