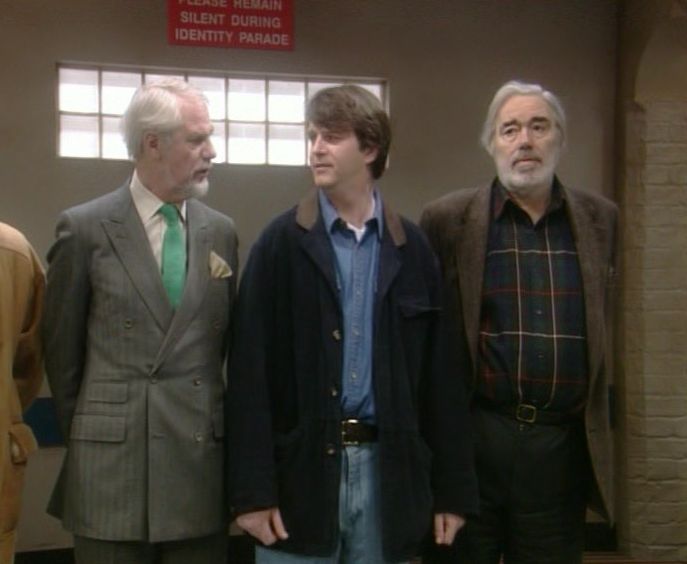 Paul, visiting the police station to report a flying saucer, agrees to do his civic duty and take part in an identity parade.  The only problem is that three independent witnesses become convinced he’s the guilty man ….

The Wrong Man was the sole series two script to be adapted from a Hancock episode (series four, episode ten, broadcast on the 6th of March 1959).  Because no recording of it exists, it would have been new to the majority of the audience and therefore, unlike the ones tacked in the first series, wouldn’t be overshadowed by a familiar original.

A significant amount of retooling was done, so it’s interesting to read the HHH script to see exactly what changes were made.  Sid’s character was totally deleted (although some of his later dialogue was given to one of the other members of the identity parade who joins up with Paul in an attempt to prove his innocence).  The original features a lengthy opening scene with Tony and Sid at home, playing various games.  Following Snakes & Ladders, Sid suggests they try a card game but Tony, wary of Sid’s cheating ways, isn’t sure (unless it’s something like Snap or Happy Families).  The arrival of a policeman, asking if they’d attend an identity parade, then moves the story onto the more familiar ground we see in this adaptation.

The Merton version opens with Paul arriving at the police station by himself.  He’s come to report a flying saucer to the desk officer (Roger Lloyd Pack).  The policeman asks if it came from outer space.  “No, from next door’s kitchen window. Closely followed by a teapot, a saucepan and a wok. This has got to stop. Every time they have a row I get bombarded. I possess more of their wedding presents than they do.”

This two-handed scene takes up most of the first five minutes, with Lloyd Pack deadpanning delightfully.  Along the way there’s time to slip in various digs at the underfunded nature of the modern police force (the security camera has been stolen, although it doesn’t really matter as the monitors were pinched the previous week).

Upon entering the identity parade, Paul spots a menacing looking character.  He’s convinced that it’s the criminal, but instead it turns out to be the Inspector (Nicky Henson).  Henson’s the latest quality actor to grace the series and wisely he decides not to milk the comedy, playing it straight instead.  I’m not entirely sure why he’s dressed like he’s stepped out of 1940’s Film Noir though (raincoat, hat, etc).

The line-up has a bizarre mix of people, who are all different ages, heights and weights.  This is never commented upon, but the oddness is plain to see.  Lurking amongst the disparate characters are the familiar features of Ray Galton and Alan Simpson.  A lovely little in-joke.

Once the first witness has identified Paul unhesitatingly it’s plain how things will play out.  We know there’s two more witnesses, and whilst Paul is convinced they’ll clear his name, the wiser viewer knows that the opposite is bound to happen.  Part of the comedy here comes from the anticipation, with the viewers being a few steps ahead of Paul and the others.

That they’re all convinced he’s guilty makes no sense at all, especially when the real criminal – who naturally enough looks nothing like Paul, is captured at the end.  Credibility is stretched to breaking point after it seems that wherever Paul goes in an attempt to clear his name (such as the cinema to find a witness who’ll provide him with an alibi) someone will pop up to accuse him of yet another crime he wasn’t involved in.

This makes it hard to take the episode that seriously, but since there aren’t too many opportunities to see remakes of the missing episodes of HHH (even if this one has undergone major changes) it’s still a more than interesting curio. 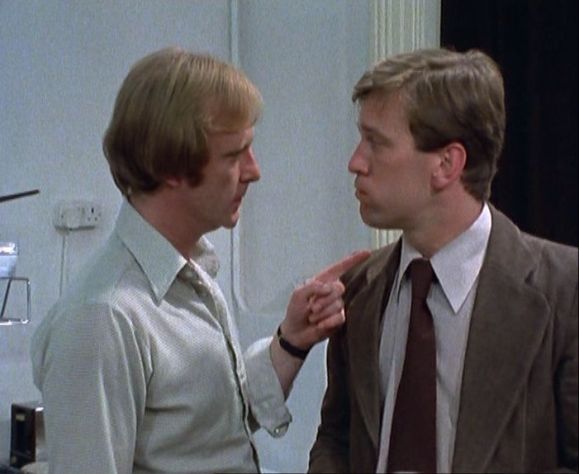 After jumping ahead to sample from episodes from series seven, it’s back to series one and the second episode – Bury My Half at Waltham Green.

Arthur convinces Terry that it’s the easiest money he’ll ever earn – all he has to do is mind Albert Stubbs (Nicky Henson) for a few days.  Stubbs has just been released from prison and is keen to dig up a large stash of money stolen by him and his associates. Rose Mellors (Ann Lynn) is the formidable wife of one of Stubbs’ old colleagues and she, along with her gorilla of a minder Jack (Tony Selby), is hot on their trail.

Terry’s got problems though – Stubbs is erratic and unpredictable and he quickly makes Terry’s life a misery.  When Jack pays them a visit, he manages to extract him from Terry’s grasp and proudly takes him back to Rose.  She’s far from impressed though – she doesn’t know who he is, but he’s certainly not Albert Stubbs …..

Bury My Half at Waltham Green is an excellent early example of Arthur’s highly devious nature.  Knowing full well that Stubbs would be a hunted man from the moment he was released, he arranged for Terry to mind a decoy.  The man that Terry thought was Stubbs is actually a character called George Wilson.  It’s fair to say that Terry’s far from pleased at being manipulated in this way, but he’s going to have to get used to it as it’s going to happen on a regular basis from now on.

Nicky Henson’s good value as the ebullient Stubbs Mk 1 whilst the ever-dependable Kenneth Cope is just as solid as the real, if rather less jovial, Stubbs.  Ann Lynn is a memorable femme-fatale who’ll stop at nothing (including bedding Terry) to find out where Stubbs is.  When Arthur learns that Terry’s slept with Rose, his expression is a joy to behold!  Tony Selby rounds off the first-rate cast as the accident prone, but intimidating Jack.  Both Lynn and Selby would return as Rose Mellors and Jack in the series two episode Diamonds are a Girl’s Worse Enemy.

If you want to be picky, then it’s hard to believe the rather elaborate decoy scene which sees Arthur and Stubbs drive off in a car (watched by Rose, Terry and Jack).  Rose and Jack follow them, but don’t realise they’re actually following an identical car, which contains Terry and George.  This scheme seems to have been dreamt up by Terry within a very short space of time and it does beggar belief that he’d be able to rustle up two identical cars (plus a lorry to drive one of the cars into) so quickly .

After various adventures, Albert digs up the money, although his joy is short lived as Rose steps in to relieve him of it.  Arthur also manages to get a small share, but the sting in the tail is left until the end – as it’s revealed that the money (comprised of one pound notes) is no longer legal tender, because those type of notes were phased out the year before.

It’s maybe a coincidence that the very next episode also revolves around a large sum of money which turns out to be worthless.